The GBP/USD currency pair has been moving in a downward correction that pushed it towards the 1.3609 support level, its lowest in a month, before settling around 1.3650 as of this writing, before the Bank of England announces its monetary policy decisions. All in all, the British pound was the biggest loser among the major currencies in the past week and those hoping for a stronger exchange rate will look to the Bank of England for some support.

The continued decline indicates that investors have taken the view that the British central bank will express its concerns about recent economic developments and that the bank interest rate will remain at 0.10% deep into 2022, disappointing expectations of an early rate hike in 2022. Money market pricing this week indicates that investors expect the bank rate to rise from 0.10% to 0.25% in the first quarter of 2022 and to 0.50% in the beginning of 2023. How this situation changes over the coming days is likely to affect the pound.

The Monetary Policy Committee has been unanimous in voting to keep UK interest rates unchanged since cutting them to crisis lows in 2020, so any vote to raise rates would be the first clear sign that a “tight” shift is underway. Overall, the unanimous vote to keep interest rates on hold and the only opposition to ending QE early could act as an initial bearish signal for the GBP. The Bank’s assessment of recent economic developments and the tone of the Forex markets are likely to provide an additional factor in influencing the GBP exchange rates.

In this regard, Fouad Razakzadeh, analyst at ThinkMarkets says, “What the market will be watching will be any noticeable change in the tone of the MPC that would indicate that policy tightening will be imminent in the coming months. And if this is the case, we could see a sharp appreciation in sterling, after the currency spent most of the summer trading sideways.”

The main risk to any bullish GBP narrative is that the Bank of England is signaling caution about the recent rise in UK gas prices, warning that further hikes in household and commercial utility charges will slow the economic recovery.

The recent losses of the GBP/USD pair moved some technical indicators towards oversold levels, and there are some indicators such as the MACD that have a chance to decline further before reaching those levels. The closest bearish targets are currently 1.3570 and 1.3490, and the price may reach them easily if the current weakness factors continue. On the upside and on the daily chart, the bulls still need to move above the 1.3815 resistance first and then to the 1.4000 psychological resistance after that to confirm that the outlook for the trend will turn to the upside instead of the current bearish momentum. 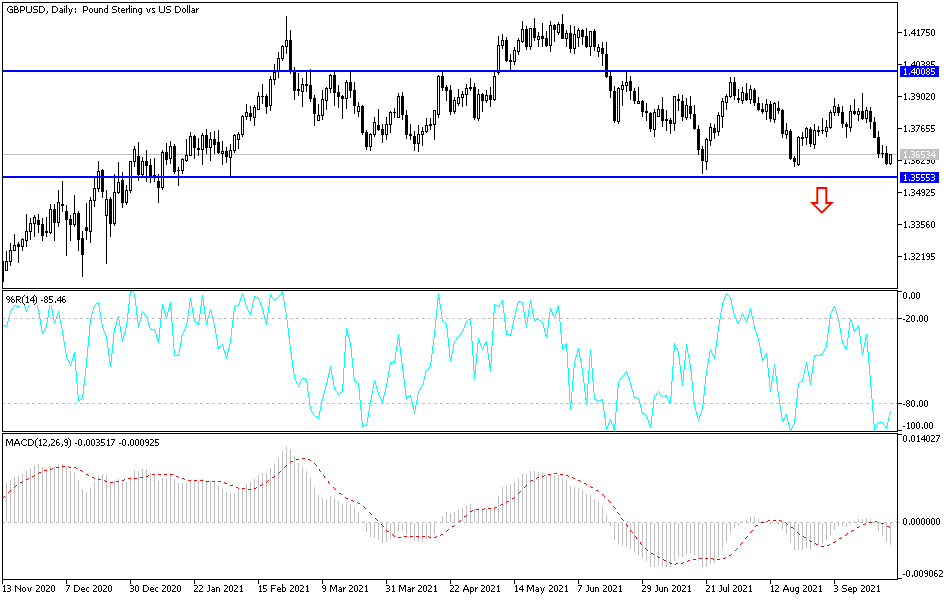