The GBP/USD has been trying to compensate for its sharp losses that pushed it towards the 1.3411 support level, a 2021 low. The rebound gains did not exceed the 1.3575 level and closed the week’s trading stable around the 1.3542 level. Commenting on the performance of the pound in the Forex market, a veteran trader in the Forex market says that sterling has crossed a turn and it would be unwise to sell it. According to Brent Donnelly, president of Spectra Markets and author of Alpha Trader, he is no longer ‘bearish’ on the pound in the wake of this week’s events as he believes the recent market panic over fuel is over.

“The number of people talking about gas station clusters and the failure of UK energy retailers may also be a potential sign of the peak of the Great Energy Scare of 2021,” says Donnelly, who recently worked at HSBC’s business office in New York. “I’ve been anticipating a drop in sterling on the topic of ‘hiking to lack of energy and employment is bad’, but I will say this: people tried this trade in US dollars at the end of 2020 (selling US dollars, selling bonds) and it worked but then a few weeks later went horribly wrong very quickly.”

Currently, it appears that the British currency selling has already turned against the traders. Donnelly adds, “Exciting nominal currencies attract money inflows once real prices are stable. I no longer expect the pound to fall.”

The nominal bond yields are the coupon payments on UK government bonds, and they’ve risen sharply recently as investors anticipate higher UK inflation and interest rates at the Bank of England in the future. Higher yields are usually supportive of a currency, so a fall in sterling in the face of higher yields surprised investors, with at least one analyst – Adam Cole at RBC Capital Markets – noting that sterling was now behaving as an emerging market currency. The argument made by some currency market commentators is that the problem with sterling is that while nominal returns have been rising, real returns have not.

They say this indicates that investors are concerned about UK inflation, at the expense of the higher yields offered by bonds.

The apparent driver of the recent “inflationary panic” among global investors has been the rise in energy prices, and so it stands if these inflation fears fade away, the pieces will fall into place as the pound rises. Analysts note that energy trading – where speculators join the market to bet on higher gas prices – could be frothy and a peak is imminent.

In the UK, the energy crisis went even further as consumers flooded gas stations out of fear of fuel shortages. This means that UK consumers are likely to be more prepared for the global crisis and more likely to buy fuel out of panic than in other countries.

Despite recent rebound attempts, the general trend of the GBP/USD currency pair is still bearish, and according to the daily chart below, the pair still has a long way to get out of the sharp bearish channel. To confirm the reversal of the trend, the bulls need to break through the resistance levels at 1.3730 and 1.3880, and from there to the psychological peak at 1.4000. Stability below the 1.3500 support level will increase expectations for the bears’ continued control to move towards the next psychological support 1.3200.

See also  May Be Time for Profit-Taking

The GBP/USD is not anticipating important US or British data today, and risk sentiment will have a strong and direct impact on performance, especially with regard to the energy crisis in Britain. 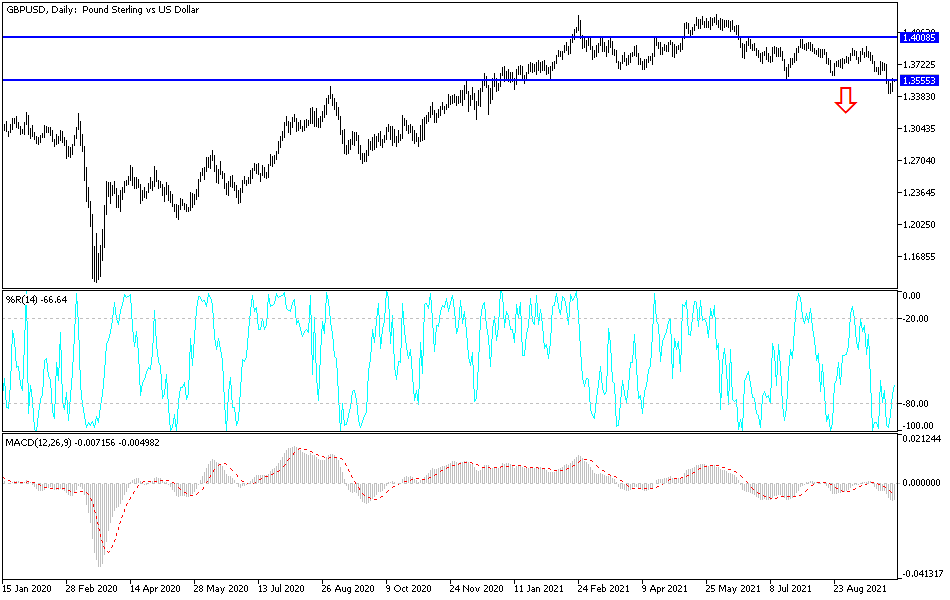