Last week, Cable broke out of a full-flag pattern that had been developing since the February high. Following this breakout we saw a sizable retracement develop, but not an unexpected occurrence given the nature of how GBP/USD often trades.

As long as the trend-line from May isn’t broken, the near to intermediate-term outlook is neutral at worst, but generally bullish. We may see another test of the nearly one-year-long trend-line, but a test would be viewed as a potentially good risk/reward opportunity to join the trend higher.

A break of the trend-line would warrant abandoning a bullish bias at the least and perhaps even turning outright bearish. We will worry about that should it happen.

For now, focus is still on the top-side. The first big level to overcome resides around the 14000 threshold. In March it proved a difficult spot for Cable to overcome once it had fallen back below it, failing to reclaim it on several occasions.

Last week the level put in yet another ceiling. A daily close above 14017 should do the trick in getting the ball rolling towards a test of the February high at 14241.

Check out the Q2 GBP Forecast 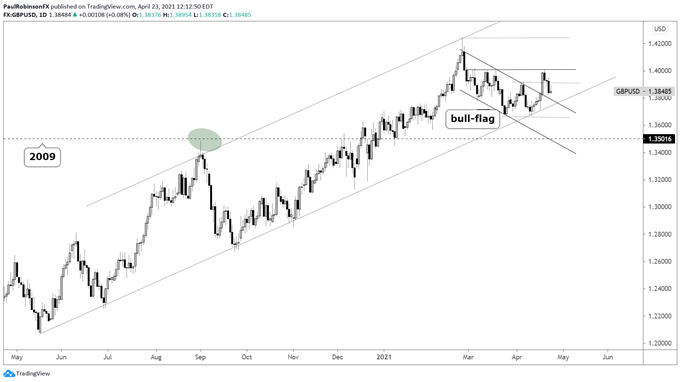