Market participants were so eager to learn the results of data that they completely ignored other macroeconomic reports, in particular the final data on UK PMI indexes. The figures turned out to be significantly worse than the preliminary estimates. The Index decreased to 55.0 from 59.6, while it was expected to drop to 55.5. The UK fell to 54.8. Economists had projected the index to decline to 55.3 from 59.2. Despite such weak data, there was no market reaction.

The jumped immediately after the publication of NFP data. The upward movement was associated with the number of jobs created outside the agricultural sector. The report showed that the economy added only 235,000 jobs versus the forecast value of 750,000. This indicator can be called a leading one as it clearly shows that the unemployment rate will not decrease in the near future.

Given the current rate of population growth in the United States and such a number of monthly jobs created, is likely to remain at the same level. Simply put, the recovery of the labor market has almost stopped. Traders were rather disappointed with such weak data and rushed to sell off the . However, after a while, the sentiment had changed dramatically. Speculators started massively opening long positions on the US currency.

It took investors several hours to comprehend the content of the report and correlate the number of new jobs with the unemployment rate, which fell to 5.2% from 5.4%. The fact is that the unemployment rate at the level of 5.0% is considered optimal for the US labor market. In other words, the current level is quite close to the target one. It seems that the labor market has fully recovered and reached an optimal state.

This is why the number of new jobs indicates that the labor market will continue to stabilize. The Fed is sure to take notice of this report when making a decision on a gradual tapering of the bond-buying program. So, it is not surprising that at the end of trading, the US dollar began to strengthen. The upward movement may last for several days. Today, the macroeconomic calendar is completely empty and nothing will undermine the greenback’s growth.

During the two weeks of the correction, the GBP/USD pair returned to the resistance level of 1.3880 logged in mid-August. This led to a drop in the volume of long positions and to a slowdown of the upward movement.

The technical indicator RSI reached the 70 line, showing that the British currency is overbought. It signals short positions.

It seems that the correction from the support level of 1.3600 may end. The 1.3880 level will act as a resistance. Relative to this level, there may be a gradual decline in the quote. First of all, bears are sure to target the level of 1.3800.

An alternative scenario will be relevant if the pair consolidates above the level of 1.3900 on the 4H chart. In this case, the correction may push the pair to the psychological level of 1.4000.

See also  Bulls May Rest Under 1.38 Ahead of NFP

Technical indicators give a sell signal on the short-term and intraday charts after the price rebound from the resistance level of 1.3880. The medium-term chart gives a buy signal based on the upward cycle from the support level of 1.3600. 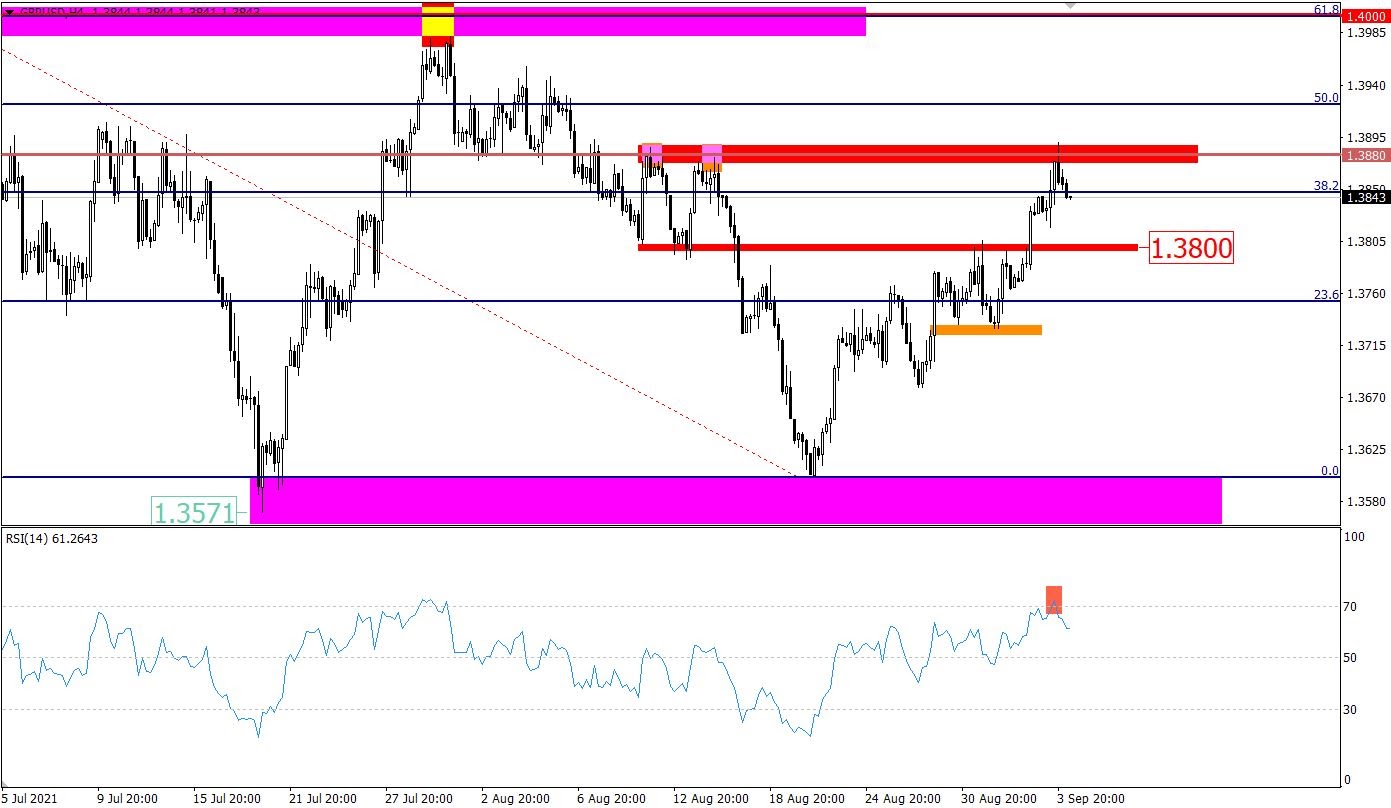