Get the Forex Forecast using fundamentals, sentiment, and technical positions analyses for major pairs for the week of November 15, 2021 here.

The difference between success and failure in Forex trading is very likely to depend mostly upon which currency pairs you choose to trade each week and in which direction, and not on the exact trading methods you might use to determine trade entries and exits.

When starting the trading week, it is a good idea to look at the big picture of what is developing in the market as a whole and how such developments and affected by macro fundamentals and market sentiment.

There are a few strong valid long-term trends in the market right now, so it is a good time to be trading to take advantage of that.

Last week’s Forex market moved in line with the long-term bullish USD trend and offered some good trading opportunities. There was also plenty of activity in precious metals, and some agricultural commodities. In the Forex market, the U.S. dollar was the strongest major currency over the past week while the Canadian dollar and the euro were the weakest.

I wrote in my previous piece last week that the best trades were long of the S&P 500 & NASDAQ 100 Indices in US dollar terms, and long USD/TRY and short GBP/USD following respective daily (New York) closes beyond the long-term high or low closing prices. This was a good and profitable call, as although the S&P 500 and NASDAQ 100 indices fell by 0.40% and 0.89% respectively, USD/TRY rose by 2.44% after Monday’s high close, while the GBP/USD currency pair rose slightly by 0.08% after Tuesday’s close. This produced an average profit of 0.24%.

The headline takeaways from last week were:

The Forex market has seen a rise by the US dollar in line with the long-term bullish dollar trend.

The coming week is likely to see a similar level of market activity active market, with only a few high impact events scheduled:

Last week saw the global number of confirmed new coronavirus cases rise for the fourth consecutive week after having fallen for two months. Approximately 51.6% of the global population has now received at least one vaccination. Pharmaceutical industry analysts now expect a large majority of the world’s population will receive a vaccine by mid-2022.

The best strategy in the Forex market over the coming week will probably be to look for long trades in commodities, or in long USD Forex trades. 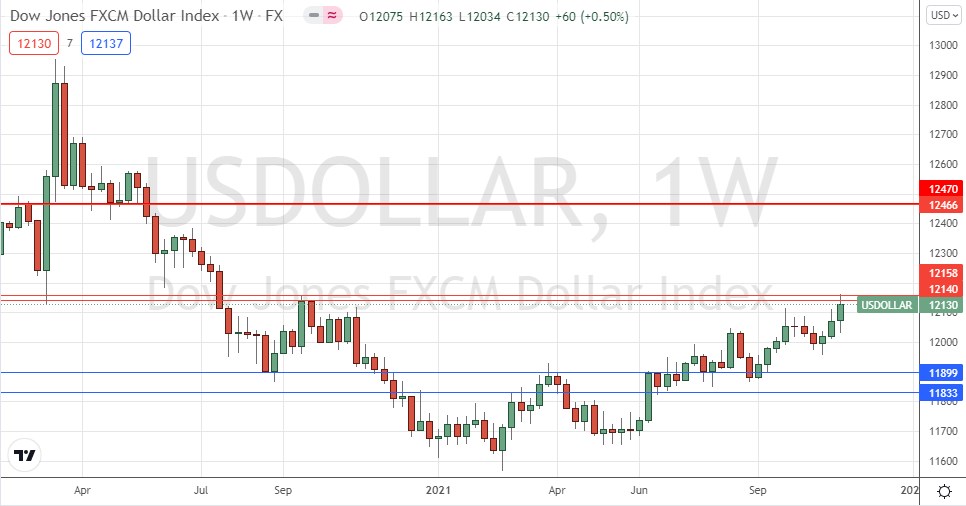 This major currency pair has been in a long-term bearish trend since May, but with deep bullish retracements, making it difficult to trade. However, last week saw the price fall sharply, especially on Wednesday following the U.S. inflation data release. The week ended at a 15-month low closing price, and the price closed very near its low, which is a bearish sign.

This currency pair is likely to fall further over the coming days, with no key support levels above the $1.1400 area.

Traders do need to be careful with this currency pair to only trade short when the short-term momentum is bearish. 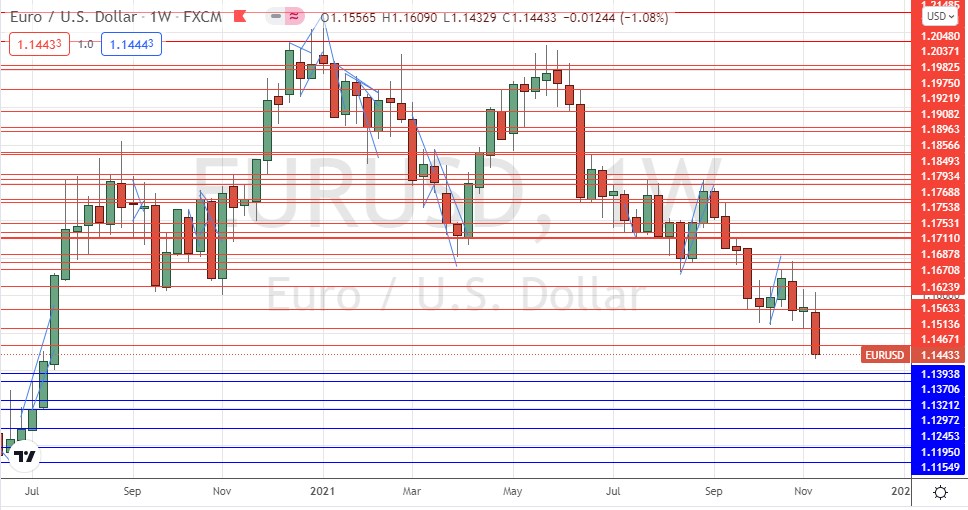 The price made another all-time high weekly closing price last week, printing a strong bullish candlestick which closed near the high of its range. This suggests healthy bullish momentum. The story here is about the never-ending depreciation of the Turkish lira which is due partially to the fact that the Turkish central bank is subject to political interference from the presidency which has a very controversial view of monetary policy, and partially due to ongoing structural problems in the Turkish economy.

It can be difficult to trade the Turkish lira as spreads are wide and overnight financing fees (swaps) very high. However, the persistence of the short Turkish lira trend over many years can make it an attractive trade. 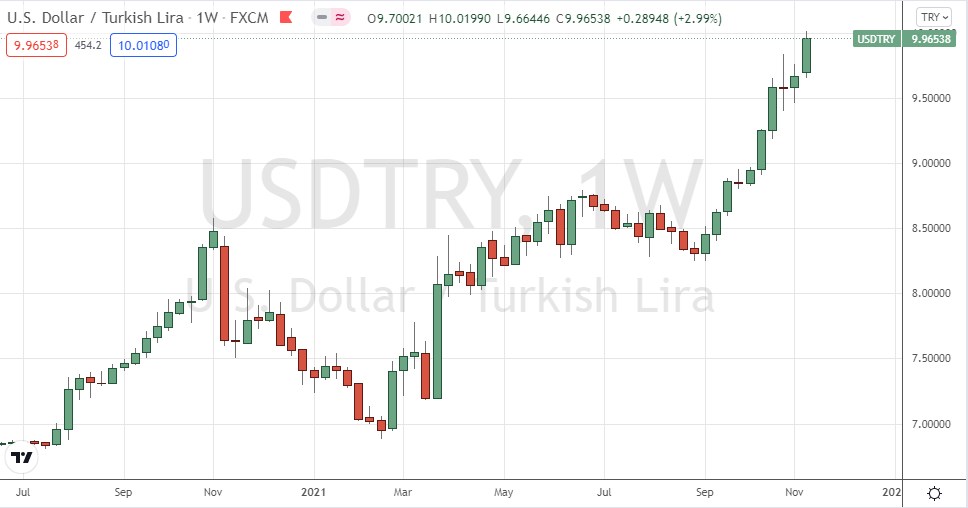 As inflation continues its global rise and supply chain difficulties persist, there is arguably a fundamental headwind behind commodities, especially commodities which are widely consumed such as agricultural commodities. Wheat is a major agricultural commodity and of course will have its own issues regarding supply and demand. However, it is notable that the price rose strongly last week to another 4-year high. The close of the weekly candlestick was near the top of this range.

Speculative plays in commodities are not for everyone, but they can double or even triple in price over a year or so, so an investment aiming for that kind of time frame may be an interesting trade. Short-term speculators could also try to trade Wheat long, although it is not easy to day trade wheat unless you use a CFD or wheat futures, with the latter being relatively expensive for most. 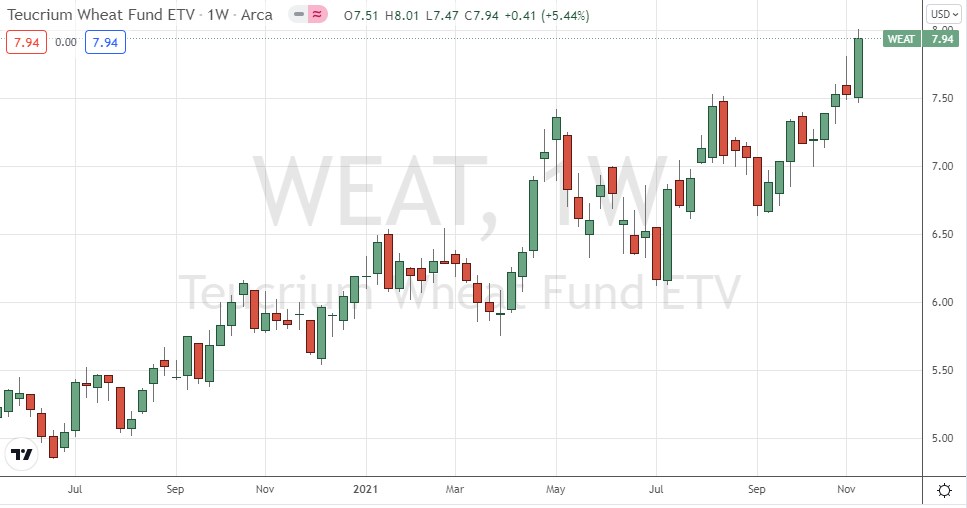 I see the best opportunities in the financial markets this week as likely to be short EUR/USD, and long USD/TRY and Wheat.