Gold is straddling the middle of its short term trend in early trading and speculators who want to swim its waters should be on the lookout for strong movements.

Gold reached a high of nearly 1834.00 on the 3rd of September, which tested mid-term highs from the middle and end of July. However yesterday’s trading saw a slightly strong reversal lower accomplished in the precious metal, and early this morning a low of about 1814.00 has been tested. Gold while remaining a cornerstone of the investing world as a safe haven to guard against the financial risk of holding currencies is nevertheless, also a volatile commodity to try and trade for short term speculative endeavors.

Manipulation in the gold market is not uncommon and the price of the commodity can jump up and down with the best of speculative assets. Yesterday and today’s downward movement which tested short term support ratios need to be expected by technical traders and looked at as a common part of the trading landscape. What makes the slight downturn intriguing for experienced technical traders is the perception the slight movement lower which transpired yesterday and early today were demonstrated when many U.S investors were out of their offices due to the Labor Day holiday.

As American traders make their way back into work today and tomorrow it is possible that gold may be viewed as being oversold. Technically it can be argued that gold has more downward motion it needs to traverse in the short term and nearby support ratios are likely to be tested, but when a short term 5 day chart is compared to a one month chart technical suddenly can be thought of in a different light. The potential additional trading volume in gold today and tomorrow may make the commodity volatile.

Gold has achieved a rather consistent bullish trend since its lows on the 9th and 10th of August. If current short term support near the 1812.00 level is able to prove stable and the precious metal is able to stay above the 1810.00 mark this may be a rather interesting bullish signal today.

Traders who believe a reversal higher is possible may look at the nearby support levels as a potentially good place to buy gold. However, if gold were to break the 1807.00 level below, another test of the 1800.00 mark could be seen near term. Speculators who continue to believe gold is a solid buying opportunity within the 1814.00 to 1808.00 levels may see productive results from their long positions. 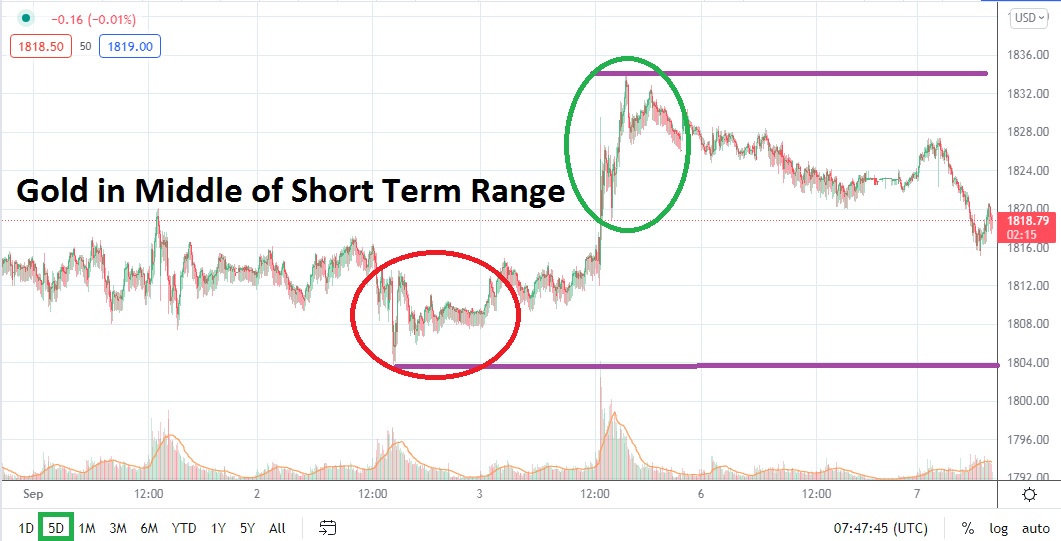