Yesterday triggered a High 2 bull flag buy signal, but Monday had a bear body and it followed a bear bar on Friday. Also, the bear channel from the Sept. 3 high was tight. This was a weak buy setup.

There were sellers above Monday’s high, and yesterday closed back near the open. A doji bar is a weak entry bar. 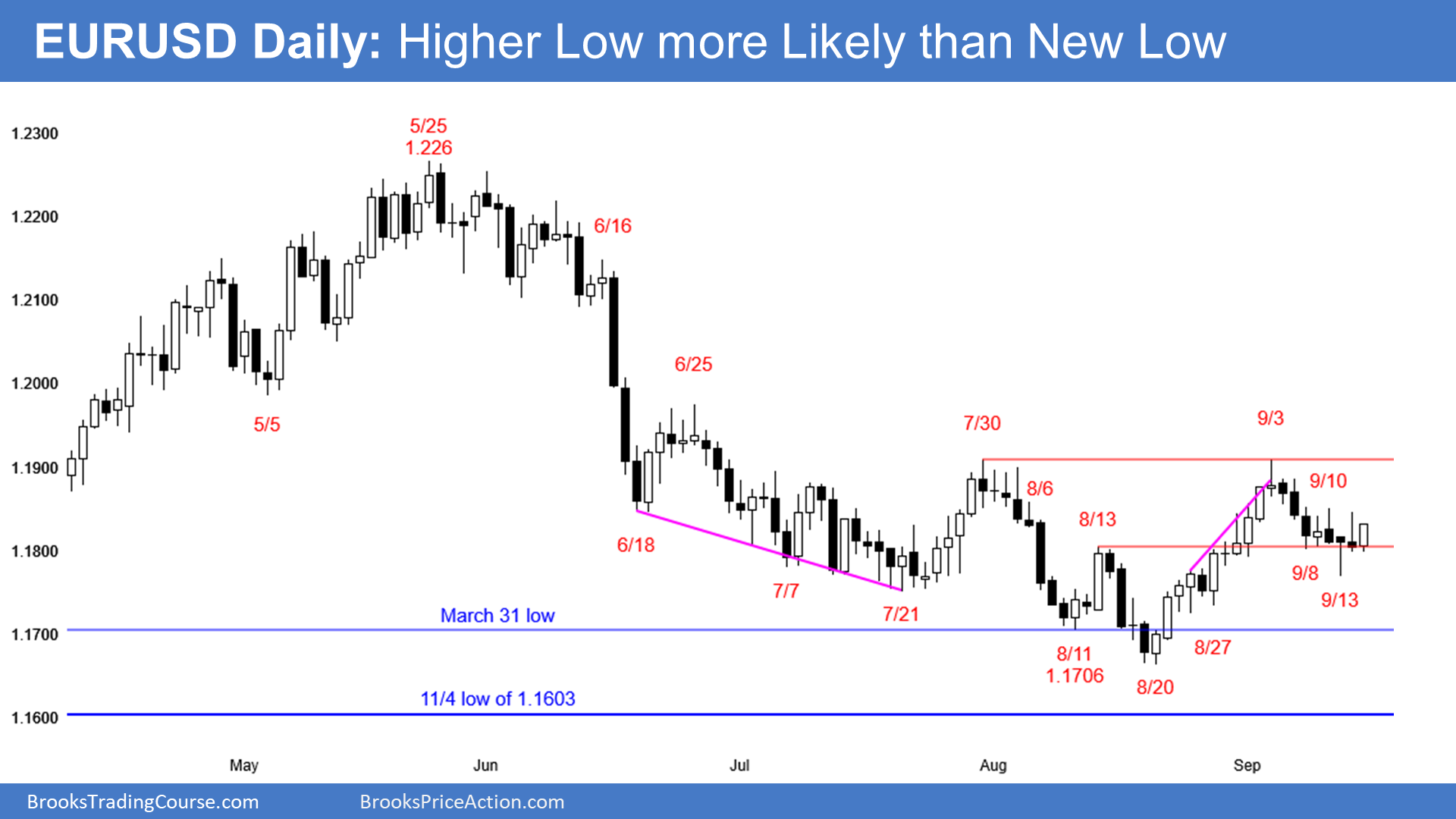 A weak entry bar and a weak buy signal usually does not lead to a strong trend.

So far, today is a bull bar, but the EUR/USD has been in a tight trading range for 6 days. Traders are deciding if the selloff from the September 3 high is a pullback from the Aug. 20 rally or a resumption of the bear trend that began in May.

6 of the past 8 days have had bear bodies, although most were small and had prominent tails. This is therefore not as bearish as it could be.

The late August rally was strong, and it began at the bottom of a yearlong trading range.

The 7-day selloff was weak, and it looks more like a pullback in a bull trend than a resumption of the bear trend.

The strong rally from support and the weak reversal down makes it more likely that the selloff will form a higher low. Traders should expect a test of the Sept. 3 high.

But because the EUR/USD is in the middle of a 4-month trading range, the probabilities cannot strongly favor the bulls or bears. The chart is only slightly more bullish than bearish. That could quickly change with a couple big bear days closing near their lows.

All financial markets might be sideways into next week’s FOMC announcement. It could lead to a strong move in either direction.

See also  10 year yield test the swing highs from August and September, but stalls the
Disclaimer: Fusion Media would like to remind you that the data contained in this website is not necessarily real-time nor accurate. All CFDs (stocks, indexes, futures) and Forex prices are not provided by exchanges but rather by market makers, and so prices may not be accurate and may differ from the actual market price, meaning prices are indicative and not appropriate for trading purposes. Therefore Fusion Media doesn`t bear any responsibility for any trading losses you might incur as a result of using this data.