The EUR/USD‘s attempts to correct upwards are still very weak, as the US dollar’s gains are still helped by the imminent raising of US interest rates. Those expectations increased amid a torrent of important US economic data results that support this. The bearish collapse of the EUR/USD currency pair reached the support level of 1.1263, the lowest in 16 months, before settling around the 1.1320 level as of this writing. The euro is trading relatively flat after the latest crash as the Eurozone economy continues to show weak growth. Despite being one of the best currencies in advanced economies in 2021, its path toward the end of the year is unclear due to the lackluster economy in the post-pandemic world.

According to EUROSTAT, the Eurozone economy grew by 2.2% in the third quarter, essentially matching market expectations. This is a slight increase from the 2.1% growth rate in the second quarter. Gains were led by Austria, France and Portugal, and Germany and Italy posted modest GDP growth.

Overall, the Eurozone economy is expected to grow by 5% this year, although officials warn that rising energy prices, deflationary inflation, increased COVID-19 infections and supply chain disruptions pose threats to the EU economy. Employment data for the third quarter was also released on Tuesday. It found that employment change rose at an annual rate of 2% in the July-September period, beating market estimates of 1.6%.

Final data from Eurostat yesterday showed that inflation in the Eurozone rose as expected in October. Inflation rose to 4.1 percent in October from 3.4 percent in September. The rate was in line with the estimate published on October 29. The highest rate was last recorded in July 2008. Excluding energy, food, alcohol and tobacco, core inflation rose to 2.0% from 1.9% a month earlier. The rate was revised down from a previously estimated 2.1 percent. The largest contribution to the annual increase came from energy, followed by non-energy industrial goods and services. Energy prices recorded a sharp annual growth of 23.7 percent.

Speaking before the European Parliament’s Economics Committee, European Central Bank President Christine Lagarde acknowledged on Monday that inflation in the Eurozone will remain high for much longer, acknowledging that she had made a mistake. “We continue to see inflation declining next year, but it will take longer to decline than originally expected,” she said. “Despite the current high inflation, the medium-term inflation outlook remains weak.”

Lagarde sees inflation falling below the 2% target. She does not expect the central bank to pull the trigger to raise interest rates next year.

The bears are not concerned about technical indicators moving towards strong oversold levels as long as the pressure factors on the pair exist and are increasing. Therefore, it does not rule out a move to the next support levels at 1.1160 and even psychological support at 1.1000 as long as the euro is weak. On the upside, and according to the performance on the daily chart, the pair must breach the 1.1530 resistance first to form a base to launch the correction. Otherwise, the general trend of the EUR/USD will remain bearish.

The US dollar will be affected today by the announcement of US jobless claims and the reading of the Philadelphia industrial index, as well as a new round of US monetary policy officials 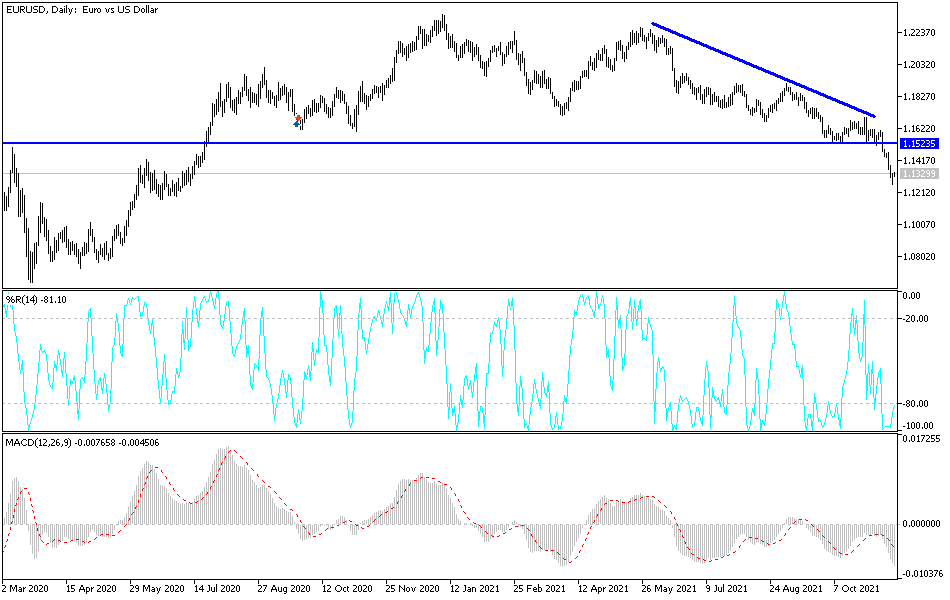