It’s a decisive day for the euro pairs, with markets and traders awaiting an update of the monetary policy decisions from the European Central Bank. The EUR/USD pair is approaching the 1.1800 level after its recent gains, which touch the 1.1909 resistance, its highest in two months. Today, the EUR/USD is expected to move higher, and the demand for the euro may increase if the European Central Bank announces Thursday that it intends to start the process of ending its crisis-inspired quantitative easing program. The bank’s September policy decision will be released at 12:45, followed by a press conference at 13:30 and could gain more attention than usual after several policy makers in the past couple of weeks have indicated that policy may be recalibrated this week.

One thing is clear: recent data are very positive. The European economy will be able to recover its pre-epidemic levels of income by the end of this year or the beginning of next. “We will have new expectations in the coming days and we will make our decisions accordingly,” Executive Board member Luis de Guindos told El Confidencial last week. The perceptions are that purchases under the Pandemic Emergency Purchase Program could be reduced in what could be a supportive development for the EUR as this would mark the beginning of the end for the Emergency Bond Buying Program.

This comes at a time when the European Central Bank is already buying a smaller volume of European government bonds than the US Federal Reserve. And while the Fed is widely expected to hoard $120 billion a month for quantitative easing faster than the European Central Bank once the process of tapering it begins, any adjustment from Frankfurt this week would widen the euro’s favorable spread for a short time at least.

This is why European government bond yields have risen along with the euro exchange rates since August 25 when ECB Chief Economist Philip Lane first suggested in an interview with Reuters that a change might be announced this week. The European single currency briefly rose above $1.19 last week to trade at its highest levels since mid-June and those levels could be brought back to the fore on Thursday if the European Central Bank, after all, begins to end its pandemic-inspired bond-buying programme. “At the September meeting, we will assess the appropriate calibration for the fourth quarter of the year taking into account movement in market interest rates and inflation expectations,” Chief Economist Philip Lane told Reuters. “Our commitment to maintaining favorable financing conditions throughout the pandemic crisis phase means that the purchase decision must be seen as an implementation issue.”

The European Central Bank had bought €1.34 trillion in European government bonds under its €1.85 trillion Pandemic Emergency Purchase Program by September 3, with €65 billion buying in August alone at a speed of €16.2 billion per week. This comes after it was said in March that weekly purchases will take place at a “much higher pace” over the coming quarters than in the first months of the year, as part of efforts to ensure financing costs are reduced and that financing terms remain favorable.

Commenting on the event, Sten Jacobsen, chief investment officer at Saxo Bank, said: “Looking forward, we believe that ECB hawks will push more in favor of the emergency monetary policy exit strategy. “Initially, we expected the discussion on the future of PEPP to happen in December or early next year.”

On the daily chart, the EUR/USD is in a neutral position with a bearish bias. If it moves below the 1.1800 level, that will support a bearish outlook and a move towards the support levels at 1.1755 and 1.1680. The latter level is prime for buying. On the upside, if the decisions of the European Central Bank are in support of the euro, I would not rule out the possiblity of the apir moving towards the 1.2000 psychological peak, important for the bulls in controlling performance.

In addition to the decisions of the European Central Bank, there will be statements by the bank’s governor, Christine Lagarde. From the United States of America, the weekly jobless claims will be announced. 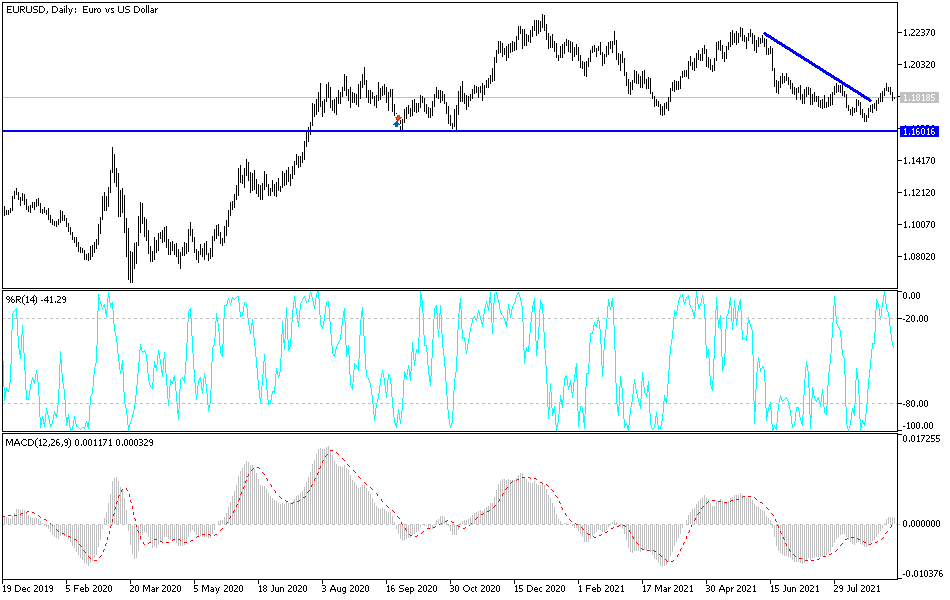