The Euro has continued to grind higher with a softer USD largely dictating price action. This is despite apparent near-term concerns with regard to rising COVID cases and renewed slowing of major economies. More specifically, Poland and Hungary have vetoed further progress regarding the EU’s Budget and Recovery Fund in response to the rule of law. However, the Euro appears to have taken a blind eye to this, with the market view being that a compromise is likely to be reached before the first disbursements, which had been touted for mid-2021.

EUR/USD: A gentle move higher for the Euro as it approaches 1.19, however, the key level on the topside is at 1.1920 (last week’s high), where a break renews interest towards a 1.20 test. That said, with the narrative tug of war persisting between a “worse before it gets better COVID outlook” in the near-term and a “2021 looking less like 2020 view “ on the back of recent vaccine developments, there has broadly been a lack of conviction in EUR/USD with the pair remaining somewhat rangebound. Given the charge higher in the equity space amid recent vaccine announcements, much of the good news looks to have been priced in for now, so I’m biased to a more defensive view. Although, while the likes of traditional safe-havens such as the Japanese Yen has firmed, the USD has continued to struggle. 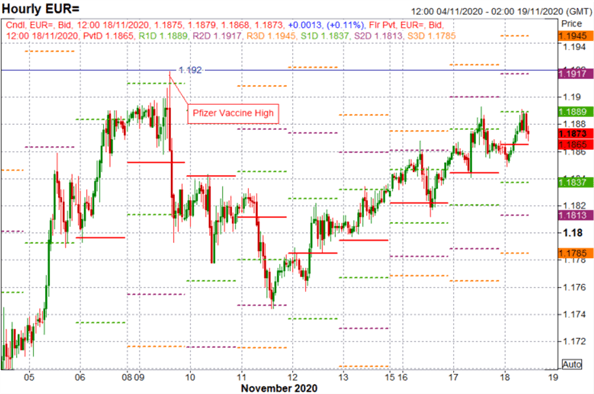 EUR/GBP: An EU-UK trade deal is not a question of if, it is a question of when. Press reports this week have hinted that a deal could be imminent after the Sun highlighted that the EU could offer the UK a deal next week. Alongside this, encouraging reports from the Telegraph overnight stated that France are willing to accept that their fishing industry will have less rights. However, while the mood music has been positive, there had still been some pushback from the UK, who signalled otherwise that a deal was imminent, raising the possibility that negotiations could stretch out into the first two weeks of next month.

While a deal will undoubtfully be positive for GBP, the question is how far will it go given that the market base case is for a deal to happen with a Bloomberg survey showing that 70% expected a trade deal, while BoE’s Ramsden attached a 20% likelihood of a no-deal. In the DailyFX weekly GBP forecast this had highlighted that markets were pricing out no-deal risks. With that in mind, the key area for EUR/GBP will be 0.87. In the short term, resistance resides at 0.9000 and 0.9020 above, while the downside, initial support sits at 0.8937 (200DMA) with 0.8900 and 0.8860 below. 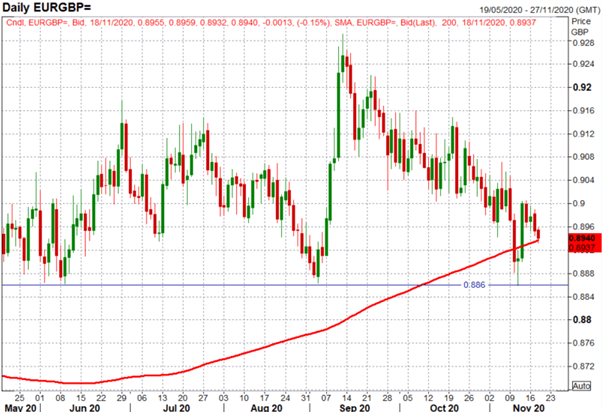