There’s just one thing traders will want to know after the European Central Bank’s policymaking Governing Council ends its June meeting Thursday: when it will begin tapering its monetary-stimulus programs. Sadly, they will likely be disappointed, both by the post-meeting statement and by President Christine Lagarde at her subsequent press conference.

The ECB seems keen to avoid all mention of withdrawing stimulus for fear that even discussing it will raise Eurozone bond yields and damage the bloc’s recovery from the slump caused by the coronavirus pandemic. In due course it will have to, but this month is too early so instead traders might be better off focusing on the ECB staff’s projections for inflation.

These projections will almost certainly be increased, and that should support the Euro after recent dovish comments by Governing Council members. Germany’s Isabel Schnabel, for example, said last month that inflation in Germany might rise above 3% this year but added that it would be only a “short-term fluctuation” that the ECB’s monetary policy strategy has to “look through.”

Even a sharp increase in projected inflation, however, would likely have only a modest impact on EUR/USD, but it would probably stave off a continuation of last week’s downturn. 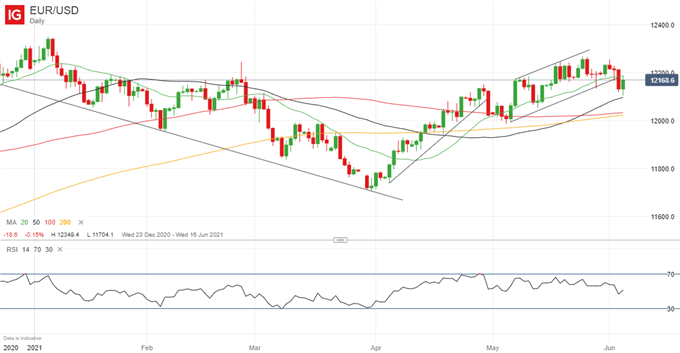 ZEW index on the slate

Elsewhere, the only major Eurozone data point slated for release this coming week is the ZEW indicator of economic sentiment in Germany, due Tuesday. The consensus forecast is for a small rise to 85.0 in June from the previous 84.4. German factory orders and industrial production in April, as well as the third estimate of Eurozone GDP in the first quarter, can all be safely ignored as too historic to provide any new information.