On Wednesday, the attempted to maintain its ground above the 96 mark. The continues on its way down against the dollar and amid a busy day for investors ahead of central bankers’ speeches, Eurozone, and inflation reports for October, and US .

While GBP rose on the back of solid data as topped expectations by printing 4.2% growth over 3.9% forecasts earlier in the day. A high print will likely support the Bank of England (BoE) to raise rates in December after it surprised markets by holding rates last month.

Currency markets are currently pricing in a high probability of a Fed rate increase in June, followed by another in November. While the European Central Bank (ECB) insists that interest rates won’t move up next year, the British pound may see a rate hike as early as next month. The markets also believe the US Federal Reserve will raise rates in mid-2022, a bet that has not been clearly disproven.

See also  US stocks trading mixed in early US trading

in the US rose in October, pushing the US dollar above 96 levels at the sixteenth-month highs as American shoppers eagerly began their holiday shopping.

Last month, US retail sales jumped 1.7%, the highest gain since March, after increasing 0.8% in September that shows advancing for the third straight month, exceeding expectations of 1.4%. Sales in October surged 16.3% and are 21.4% above their pre-pandemic levels, even as rising prices sent consumer sentiment to a 10-year low in early November.

The highest annual inflation in three decades appears to be buffered by the increasing wealth of households, driven by a strong stock market and house prices, as well as savings and wage growth.

The rising number of COVID-19 cases in Europe prompted concerns about the continent’s economic recovery. Germany prepared to vote on Thursday to impose stricter measures to control the outbreak after Austria had set a lockdown on unvaccinated people earlier in the week.

EUR/GBP at a Key Support Level

On Wednesday, the trading in a mildly descending channel plunged to its lowest level since February 2020 around the 0.84 mark, following a higher-than-expected UK CPI report.

The cross remained heavily in the red for the fourth consecutive day, extending its recent slide away from the 200-day moving average due to divergence in monetary policy stances between the BoE and the ECB. 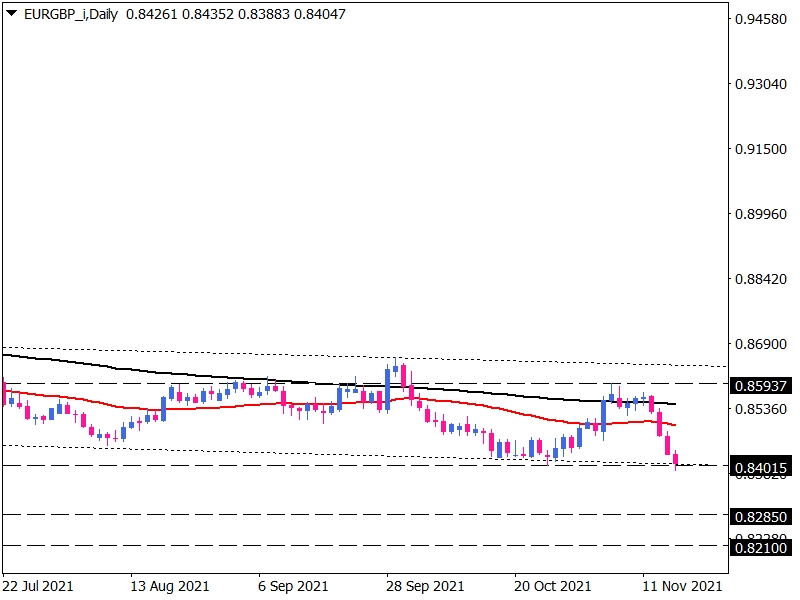