DOGE/USD has tumbled in early trading this morning and its one month range suggests additional dynamic results will be seen near term.

DOGE/USD has dropped below the 30 cents juncture in early trading today with a swift test of the 28 cents juncture. DOGE/USD has now produced a slight movement higher, but it remains near important support levels and speculators of the cryptocurrency should expect additional wicked price action to be seen near term. Intriguingly while the broad cryptocurrency market has seen many of Dogecoin’s major counterparts come within shouting distance of highs seen during the ‘irrational’ exuberance of April and May in the past two weeks, DOGE/USD has not been able to mirror these results.

Yes a high of nearly 35 cents was achieved on the 16th of August, but those highs only challenged values seen on the 9th of June. Dogecoin’s ultimate record highs of nearly 74 cents were seen in the first week of May and are beginning to feel like a distant memory. DOGE/USD is still rated as the 8th largest crypto regarding market capitalization, but its trading the past two months feels somewhat muted. DOGE/USD was near a low of 15 cents on the 20th of July and its current price is twice that, which is very solid gain compared to its current value.

If the price of DOGE/USD fails to hold near the 28 cents juncture and a test of support around 27 cents occurs, this could set off negative alarm bells within Dogecoin. If the 26 cents level begins to be challenged this could mean a rather sharp bearish trend could emerge again in Dogecoin. While the broad cryptocurrency market remains rather bullish, the almost lackluster results of DOGE/USD should be given attention.

Proponents of DOGE/USD however, may feel that the current technical charts actually are a buying opportunity. While Dogecoin has not joined other major cryptocurrencies and come within shouting distance of all-time highs, DOGE/USD has actually correlated well with the recent surge in values and the doubling of its price since July lows is a solid result.

Speculators may be tempted to look at current support levels as a buying signal if the levels prove durable. DOGE/USD has always been a volatile asset and its rather quick decline in early trading this morning after the 30 cents support level was shattered, may be forgotten abruptly if a reversal higher ensues off the current price range being tested. 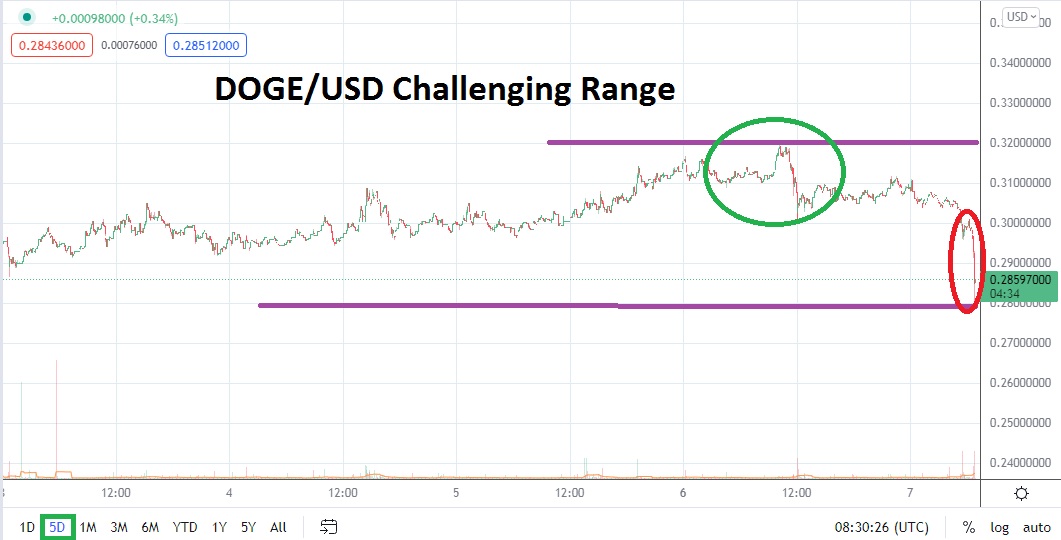