Crude oil prices pulled back slightly during Thursday’s APAC session after a strong rally seen a day before. Investors mulled rising viral cases caused by the Delta variant of Covid-19 around the globe and its ramifications for energy demand.

In Asia-Pacific, Australia and Singapore have returned to lockdowns and Japan has resumed a state of emergency this month amid viral resurgence. China’s city of Nanjing urged citizens not to leave the city unless necessary after 9 airport workers were tested positive for Covid-19 on Wednesday. This may cast a shadow over the outlook for energy demand in the region.

Meanwhile, the US Department of Energy (DoE) reported a 2.1-million-barrel rise in crude stockpiles for the week ending July 16th, compared to an estimated 4.5-million-barrel draw. This marks the first weekly gain in US commercial inventories after 8 weeks of continuous decline (chart below). This cools market expectations for a sustained rise in fuel demand and may weigh on oil prices.

The DXY US Dollar Index is hovering at around 3-month highs, exerting downward pressure on commodities. Looking ahead, traders are eyeing today’s ECB meeting for clues about the bank’s monetary guidance and its ramifications for the US Dollar. Find out more from the DailyFX economic calendar. 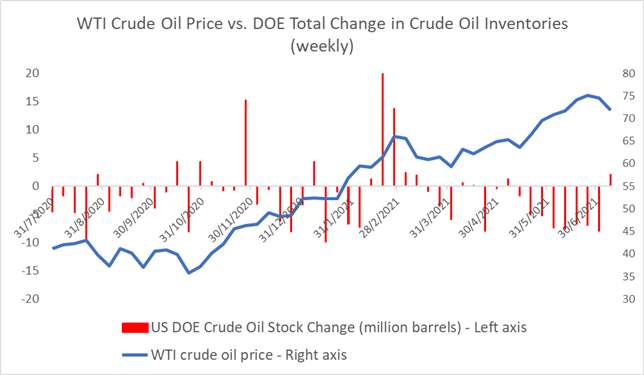 Technically, WTI entered a technical pullback after hitting a two-and-half year high of $76.95 on July 6th (chart below). Prices have since formed lower highs and lower lows, suggesting that near-term trend may have flipped downward. An immediate support level can be found at around $66.43 – the 100-day SMA line. An immediate resistance can be found at $70.24- the 50-day SMA line.

The MACD indicator formed a bearish crossover and trended lower, suggesting that near-term momentum may be tilted to the downside. 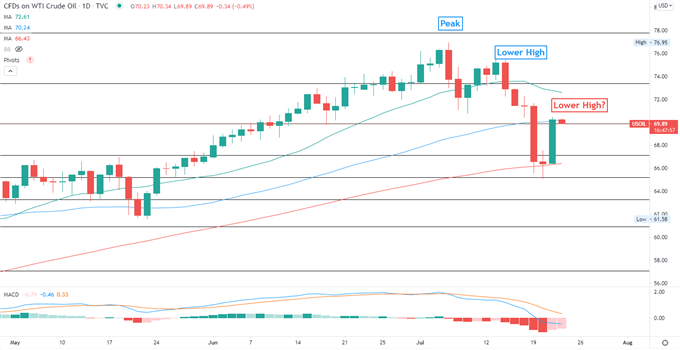