The USD/BRL continues to produce an impressive bearish trend and is now directly situated on top of critical long-term support.

The USD/BRL has built upon its bearish momentum and is situated within the realms of long-term support levels. The last time the USD/BRL came within proximity of the 5.0000 level was in the middle of December 2020. Prior to that date, June of 2020 saw the juncture actually punctured lower.

This is where things get intriguing for speculators, because if the current support levels prove vulnerable and the USD/BRL begins to test the 4.9600 to 4.9400 junctures below, this would put it within values not seen since March of 2020. Traders pursuing the bearish trend should try to stay realistic and not target values much further below the current support realms of 5.0200 to 4.9600 quite yet. However, it is admittedly tantalizing to consider what potentially could happen to the USD/BRL if the downside action continues to be demonstrated.

The USD/BRL has not been an easy Forex pair to trade for many speculators. Because after hitting the values near the current prices in the middle of December 2020, the USD/BRL began to incrementally climb and reached a height of nearly 5.8900 on the 8th of March 2021. Since this high was attained, the Forex pair has created a serious trend downwards. So the question that speculators need to ask now is if this vital support level can be penetrated lower.

Speculators may want to continue to pursue the bearish trend while using tight stop-losses via nearby resistance levels. Jumping off the trend at this juncture may prove unwise. Support being tested right now is vital and if the 5.0000 juncture is punctured lower and values can be sustained, traders cannot be blamed for believing an additional and important leg down could be exhibited.

Selling the USD/BRL at its current price level may feel suspiciously awkward because of the lows it is testing, but betting againt the trend should be acompanied by a solid amount of risk management. Until the USD/BRL proves it wants to show a significant reversal higher, selling the USD/BRL may remain a solid speculative opportunity. 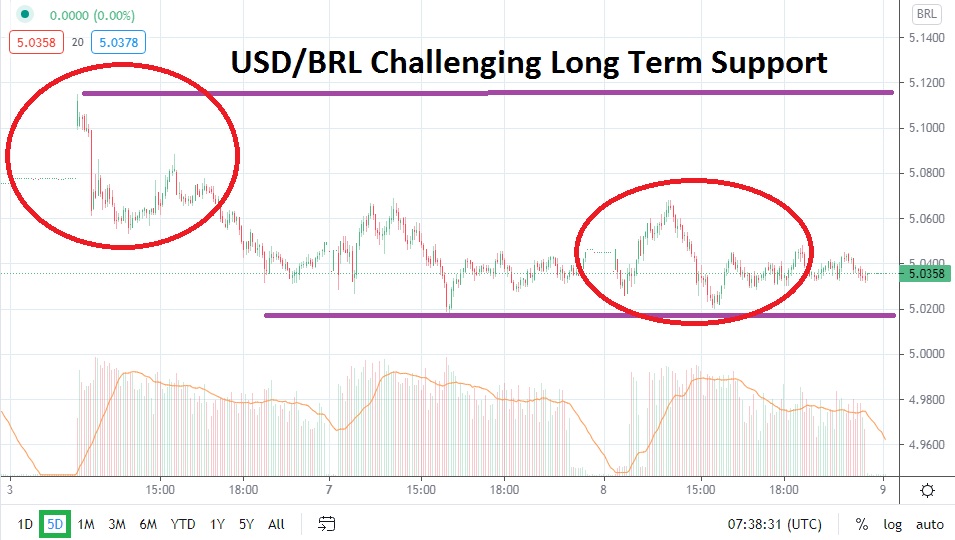