Asian equities were mostly softer today, despite a strong lead from the US on Friday. Uncertainties around Evergrande, OPEC+ and high energy price impacts appeared to weigh on investors’ minds. Mainland China are on holidays for Golden Week.

The US session was buoyed by upbeat data. Personal spending, PCE core deflator, University of Michigan consumer sentiment, as well as manufacturing PMI and ISM numbers were all slightly better than expected.

Evergrande shares went into a trading halt in Hong Kong as a major transaction announcement is expected. The perception is that the company will be selling an asset in order to raise desperately needed funds. The US$260 Jumbo Fortune Enterprise debt note guaranteed by Evergrande that matured on Sunday, has not been repaid. Unlike the coupons on Evergrande’s debt, there is only a five-day window for non-payment of the principal amount, due to administrative or technical problems.

The Australian and Canadian Dollars had a positive start to the week with commodity gains continuing to support them. Natural gas prices remain near 7-year highs and crude oil holds onto Friday’s gains ahead of the OPEC+ meeting today. The focus will be on the expected increase of 400,000 barrels per day of production.

Coffee rallied toward multi-year highs on bad weather in Brazil and Columbia.

The New Zealand Dollar softened as lockdowns were extended and the RBNZ meeting on Wednesday may not be as hawkish as the market had been expecting.

Looking ahead, there is US factory orders and the RBA meet tomorrow.

USD/CAD has broken below an ascending trend line and is near the recent low of 1.2594. That level might provide support initially but a move below there could see bearish momentum. 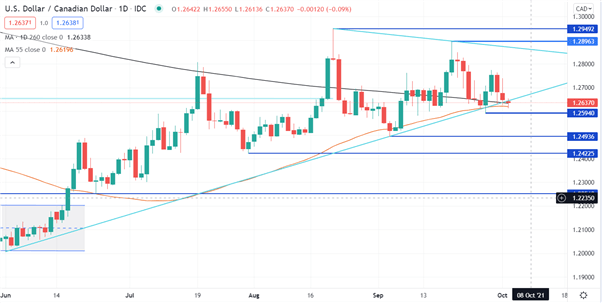