Pay attention to other European indices as well, as they all tend to move in the same direction.

The Parisian index have initially tried to rally during the trading session on Thursday to reach towards the 6800 level before pulling back. The candlestick was a little less than impressive, so it makes a certain amount of sense that we ended up less than impressive as far as the clothes is concerned. At this point, markets pulling back will probably have to deal with the 50 day EMA underneath at the 6637 level. The 50 day EMA is starting to tilt just a little bit higher, and it is of course sits just above the uptrend line as well.

You been in an uptrend for quite some time, and now it is likely that we are going to continue to go higher but the Parisian index will be highly influenced by the risk appetite around the world, as the CAC is heavily weighted towards luxury. Nonetheless, this is a market that continues to find buyers on dips, as we are seen so much in the way of value. The 7000 level still continues to be a target from the longer-term standpoint, and therefore I think it is only a matter of time before we get to that level, but it is also likely that we at least try to get there. The candlestick from the trading session on Wednesday was very bullish, but it looks as if the candlestick on Thursday suggests that we are going to continue to see upward momentum.

As far as selling is concerned, I would not feel comfortable doing so until we break down below the uptrend line, perhaps targeting for the 6400 level underneath, and then underneath there to go looking towards the 200 day EMA. In general, this is a market that is still trying to build up the structure to go higher, making a “higher high.” All things been equal, this is a market that I think will be noisy and highly influenced by the external pressures of sentiment around the world. Over the longer term, I would anticipate that this market will eventually go higher, but the occasional pullback may make the idea of trading in a little bit difficult. Because of this, I would be cautious about my trading size in general. You should also probably continue to pay attention to other European indices as well, as they all tend to move in the same direction. 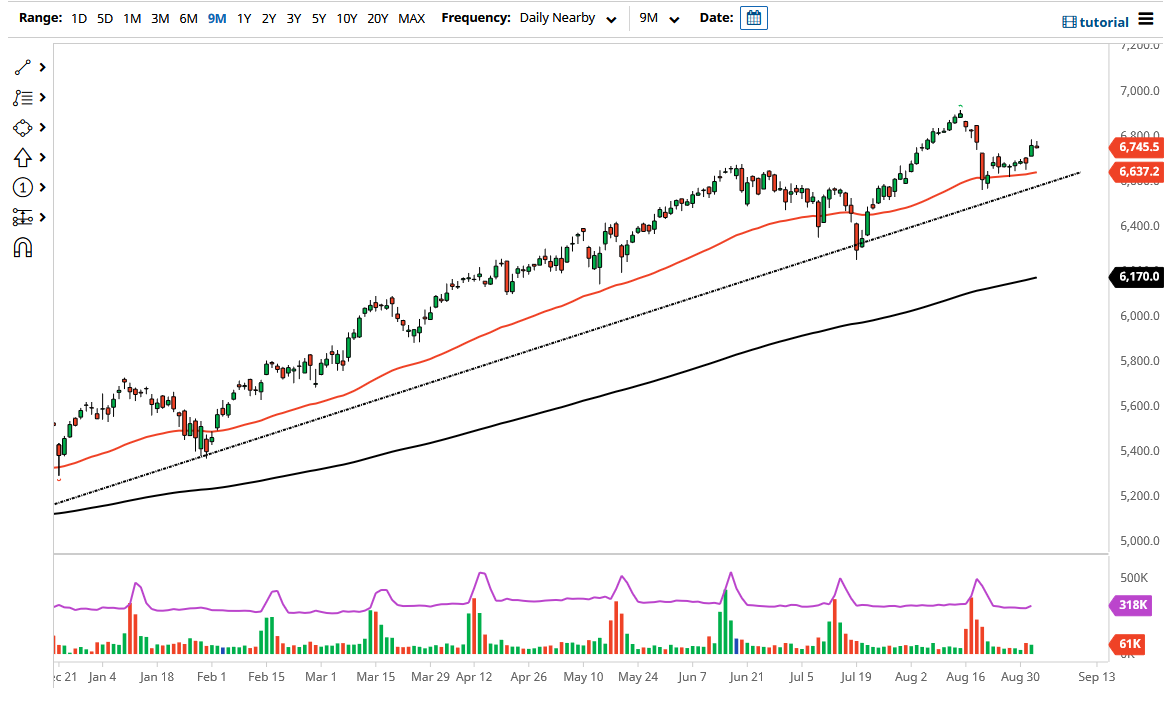