The USD/ARS as of this writing is near 98.000 and has flirted with slightly higher and low values the past couple of days. Although in the past week the USD/ARS has demonstrated the capability to produce reversals lower, they have been fought off relatively easy and buying has continued to be the dominant feature within the Forex pair. The relative consolidated range of the USD/ARS may be held up by the ‘exotic, rare and overly optimistic’ bearish speculator as a sign a change in the momentum is about to be generated, but realists simply need to point to one- and five-year long charts to argue against this bizarre sentiment.

Simply put, the USD/ARS remains within the grasp of a long-term bullish trend which shows little reason for reversing. Mid-term government elections will take place in November across Argentina and perhaps this is a hope for some form of optimism to seep into trading sentiment regarding the possibility of a more stable economic future. However, Argentina is a nation that has few friends regarding its economic endeavors and the financial world will want ‘action and not only words’ before looking at Argentina as a place to trust investing forays.

Technically, the USD/ARS may look like it is within an actual short-term consolidated mode momentarily, but that is because traders have become accustomed to the one-way direction of the Forex pair and any stop in the upwards mobility looks surprising. Yes, the USD/ARS can reverse lower, but until the Forex pair can effectively prove it has the capability to achieve bearish sentiment longer than a few days at a time, traders would be hard pressed to speculate with selling positions.

Buying the USD/ARS remains the wise decision for traders who can find the pair on their trading platforms. The key to speculating on the USD/ARS is to use limited leverage, a slightly wider stop loss ratio and make sure overnight carrying charges are not going to be too expensive to maintain a position when needed.

Traders are cautioned to remain realistic with their price targets and not hold out for a value of 100.000 which may take a couple of months to still materialize. Wagering with a buying position of the USD/ARS remains worthwhile, and the use of entry orders is also important to guard against rather awkward price fills which were not planned. 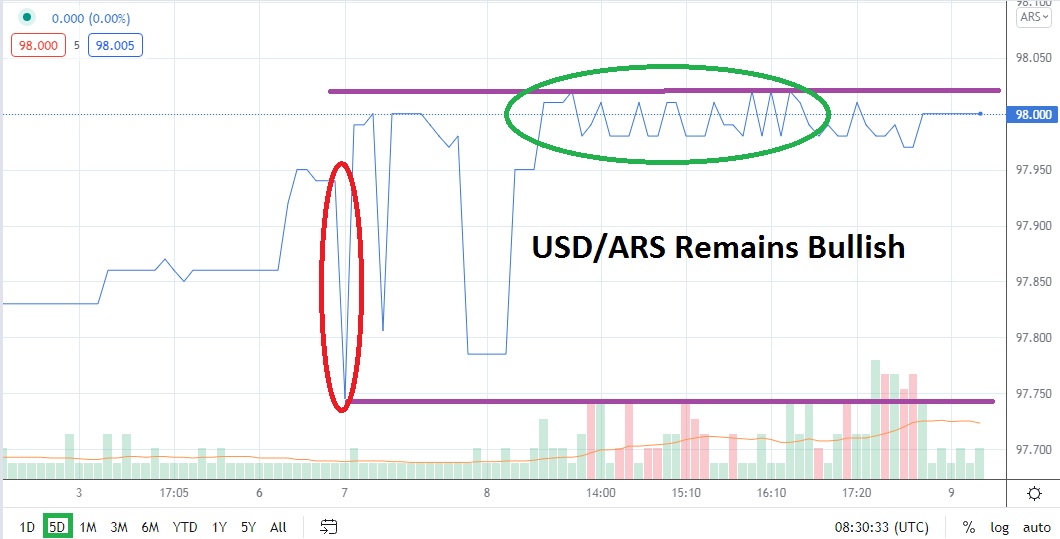