Perhaps surprisingly, swirling allegations of wrong-doing centering on UK Prime Minister Boris Johnson in recent days have failed to damage GBP/USD, which has continued to trade within a broad band between 1.3670 and just over 1.40 for the past two months and a narrower band between 1.3810 and 1.4022 over the last few sessions.

That suggests traders remain positive towards the currency, particularly as UK local, regional and mayoral elections coming up on May 6 might have been expected to add a further dash of political uncertainty into the mix. 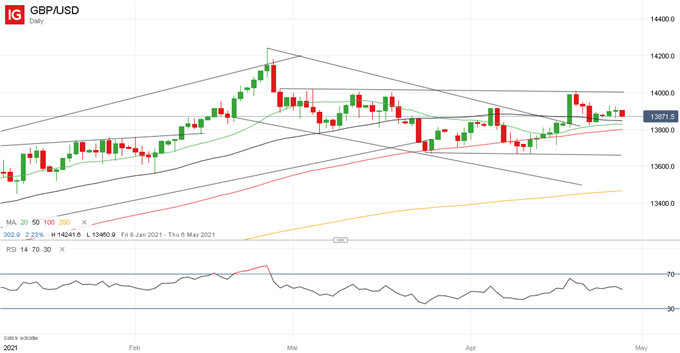 Among the allegations made, which have – in the words of Johnson’s former chief adviser Dominic Cummings – questioned the Prime Minister’s “competence and integrity”:

Much of this has been denied but Johnson’s mounting problems might still have been expected to damage the Pound, particularly as local, regional and mayoral elections in the UK on May 6 have added risk to the currency – with a majority for the independence-supporting Scottish National Party in Scotland a distinct possibility. The fact that it hasn’t argues that the Sterling bulls remain in charge and that further gains for GBP/USD could come once the claims and counter claims have been moved to the back burner.