The GBP/AUD made a multi-year low at 1.7416 in January and formed an Ascending Channel from there. As momentum gathered, it pushed through the top of the channel and not long after, broke up through the previous high of 1.8527. This level has now become a support point as it has not traded below that level since. The cross tested the level last Friday with a low of 1.8536 but it has rallied since.

Below that, the 100-day moving average is at 1.8135 and then a previous low at 1.8262 may provide some support that lies just above the rising trendline. 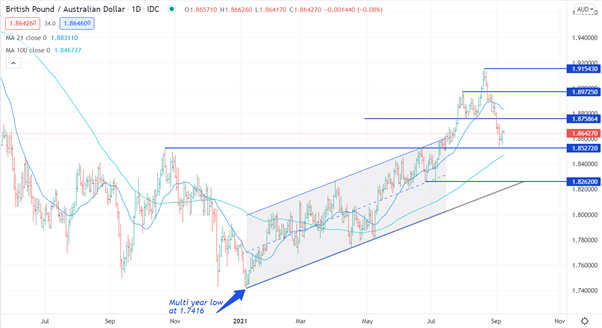 GBP/CAD is clearly in range-trading mode as illustrated in the chart below. The Bollinger Bonds highlight this sideways pattern and we can observe the collapse in volatility in the third quarter of 2020. Here we are looking at the 2 standard deviation Bollinger Bands based off the 200-day simple moving average (SMA).

Potentially, there might be some technical signals that could suggest a near term test of the upper bound of the Bollinger Band. Since making the high of 1.7888 in February, there have been 2 falling trendlines that have been broken. At the same time, the rising trendline from the May low of 1.6871 has remained intact.

On the topside, the most recent high sits just under upper bound of the Bollinger Band at 1.7626. 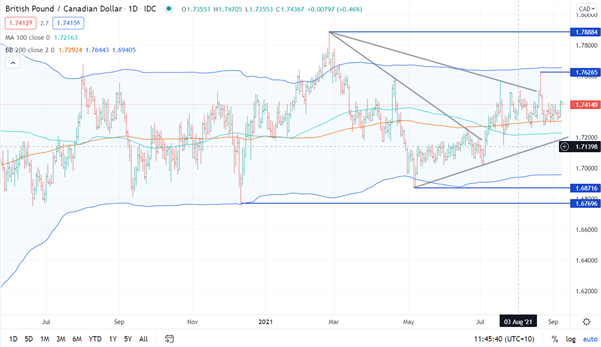