The Brazilian real has renewed a push towards important support levels which have provided many reversals higher since June.

The USD/BRL has produced a slightly bearish trend the past few days of trading and has been able to display ability to incrementally lower resistance levels. Current price action in the USD/BRL has the Forex pair near the 5.36000 value, which is a moderately lower value considering the 5.8000 level was tested in late October.

Risk appetite globally appears to be rather steady, which perhaps has helped the status of the Brazilian real too, as it discovers bearish momentum within the USD/BRL. Since late June until now, the USD/BRL has accomplished a price range of approximately 5.2000 to 5.8000 fairly consistently. Resistance has been prevalent near the 5.6700 juncture, but from the 28th of October until the 4th of November the pair did trade between the 5.6800 to 5.8000 ratios.

Perhaps the recent high water marks of the USD/BRL can be attributed to pre-US election nervousness about the outcome. Since the vote and ‘known’ result, the USD/BRL has begun to return to a rather known price range. The current value of the Brazilian real near the 5.3600 mark can even be perceived as a sincere test of support levels by some technical traders. However, if global risk sentiment remains optimistic, speculators may look at the 5.3000 mark as a potential catalyst which will propel a test of the 5.2000 support level near term.

The USD/BRL has produced a rather consolidated price range compared to many other emerging market Forex pairs. In other words, while many emerging market currencies have gained against the USD, the Brazilian real has not. The trading of the USD/BRL has proven to have provided a fairly comfortable range which speculators can take advantage of, if they have patience to maintain trades in which they are not overly leveraged. The current trend of the USD/BRL has been bearish in the short term and traders will have to again gauge their respective opinions about short-term direction.

If speculators want to pursue more bearish movement from the USD/BRL they should not become overly greedy. Traders selling the USD/BRL should use limit orders in order to have take profit positions activated so they can take advantage of the Forex pair, which has proven to be rather choppy since June.

Speculators who believe the USD/BRL will see another bullish trend spark cannot be faulted either. The current range of the Brazilian real has been challenging, and short-term trades are recommended that try to capture small movements within the USD/BRL. 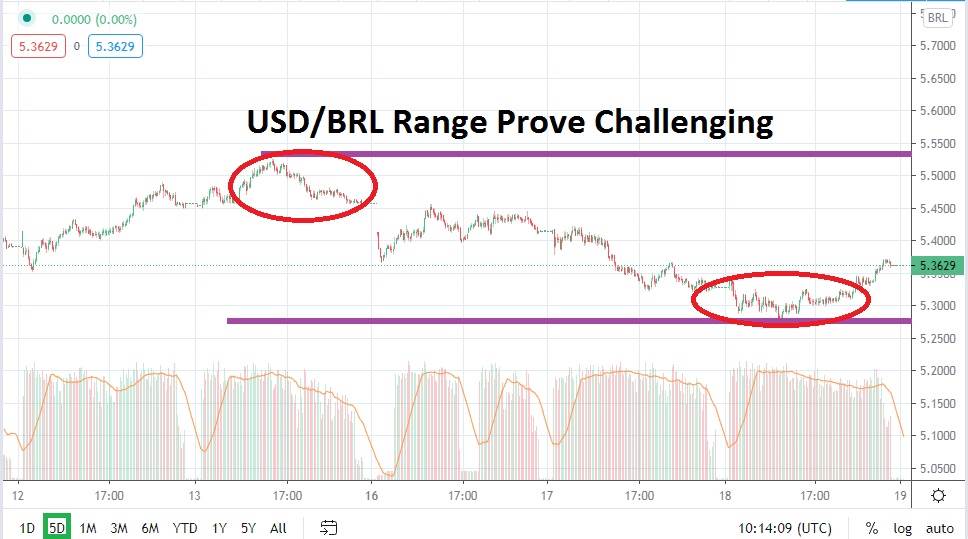