Kraken released it’s August Bitcoin Volatility Report 2 months ago. Then the cryptocurrency exchange sounded supremely confident about BTC registering higher highs as the year ends. In its October version of the same report, Kraken has maintained its bullish stance. November will see bitcoin log much higher price and volatility rallies. Also, BTC might as well be on the way to reclaiming the previous all-time high of $20,000.

Bitcoin Price And Volatility To Climb In November

If Kraken’s August Bitcoin Volatility Report is anything to go by, BTC has already left behind September’s crash in the rearview mirror and is on its way to register more ‘incremental volatility’.

The exchange pointed out that November has stood out to be the ‘third-best yielding month’ for bitcoin, on average. BTC has also showcased its best price-performance this month historically.

Kraken says that bitcoin will mirror its past November trend with regards to price and volatility this month too. But there’s a catch.

BTC dropped in the ‘suppressed volatility pocket’ on July 24 when the volatility figure plummetted to 23 percent. To keep the 8-year trend of November’s uptrend intact, bitcoin must revert back to its 315-day volatility moving average. 99 days have passed since BTC made the dip into the 15 – 30% volatility range. And the cryptocurrency risks dropping back in the pit again.

If bitcoin doesn’t galvanize back into action and volatility remains below 30 percent, the 8-year long 315-day moving average trend will not follow. But if BTC maintains its volatility numbers well above 30 percent, the cryptocurrency stands to clock as high as 66 percent wrt volatility, which in turn should boost prices too. 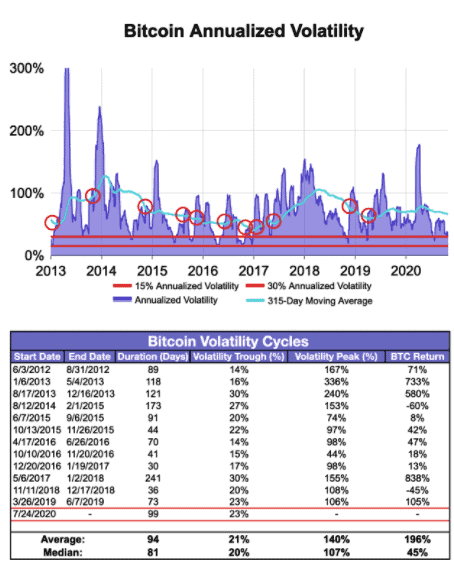 Highlighting bitcoin whale behavior, Kraken commented in its report that deep-pocketed BTC holders (read holding 100+ BTC) took full advantage of the October rally, and raked in handsome profits. But the demand for wallets containing less than 100 BTC well offset the whale selloff, which can be seen from bitcoin’s flight beyond $13,800 last month.

If the bitcoin demand continues to remain this robust, BTC is on for a rally going into the year-end.

Should demand hold strong as bitcoin matures into its current $13,000 – $15,000 range, existing and newfound demand could accelerate bitcoins’ appreciation into year-end if FOMO resurfaces and bitcoin begins climbing to a new all-time high.

Also, Kraken said that whale accumulation could also drive BTC prices higher. Much like March this year. Stoking the possibility of a new bull run, the cryptocurrency exchange said that last month’s $13,800 close was a higher high after 3 years of continuous down-trending price action. This is a convincing signal for an upcoming bullish rally.

SPECIAL OFFER (Sponsored)
Binance Futures 50 USDT FREE Voucher: Use this link to register & get 10% off fees and 50 USDT when trading 500 USDT (limited offer).