The USD/ZAR has continued to display a rather incredible bearish stance since touching a high of nearly 15.40000 on the 20th of August.

The USD/ZAR is trading near 14.30000 as of this morning and the forex pair is traversing very interesting mid-term support ratios. On the 4th of August the USD/ZAR was trading near 14.20000 when it was hit by a strong bullish move which produced a high of 15.40000 on the 20th of the month. However, since hitting this high water mark as concerns about domestic issues reached an apex among financial institutions, the USD/ZAR has reversed lower and produced a solid bearish trend.

While concerns regarding economic and social issues continue to shadow South Africa, the USD/ZAR has actually begun to mimic global forex conditions rather well. The USD has proven to be vulnerable the past few weeks and the USD/ZAR has been able to demonstrate a sincere technical ability to challenge crucial support ratios.

The addition of U.S institutional trading today after yesterday’s holiday may add some volatility into the mix short term. However yesterday’s trading results which saw the 14.22000 level tested may be a signal additional selling power may be generated. Yes, there has been a slight reversal higher in early trading this morning, but the high of nearly 14.33000 proved to be rather durable.

If current resistance near 14.36000 to 14.38000 remains strong this may prove to be a catalyst for further speculative selling. The bearish trend within the USD/ZAR has taken on a rather fast tone, but traders should also acknowledge that reversals higher do remain a key element within the forex pair and a high of 14.50000 was tested on the 2nd and 3rd of September.

The incremental steps lower in the USD/ZAR the past few weeks however continues to be a rather alluring technical trend. If traders use a conservative amount of leverage, place their stop losses slightly above perceived resistance levels and have the patience and capability to allow a trade to work, selling the USD/ZAR remains an attractive wager.

USD/ZAR traders should make sure they do not become overly ambitious and practice the art of realistic price targets. If support levels near the 14.2600 to 14.24000 ratios start to be challenged, speculators may believe the USD/ZAR could test mid-term lows which were seen in early August and perhaps even come within proximity of early July low water values. 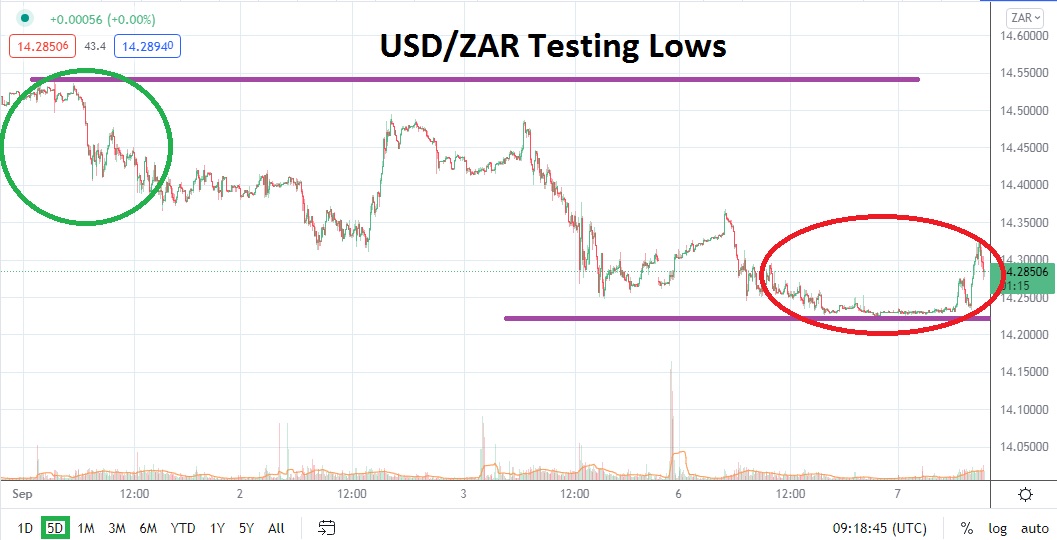