For the second day in a row, the EUR/USD pair is trying to compensate for the losses of its recent bearish correction amid the improvement in US economic data. It seems that the US job numbers are below the market’s expectations, and accordingly, the EUR/USD returned to stability around the 1.2194 resistance level after a downward correction to reach the 1.2104 support level. The performance of the pair is determined by several factors this week as US inflation figures will be announced, and a major meeting of the European Central Bank is scheduled. Commenting on the performance, Karen Jones, Head of Technical Analysis at Commerzbank, said: “EUR/USD did not sustain its initial break below the 23.6% retracement at 1.2133. This was not enough to restore the upward movement either and we cannot rule out a deeper bounce to 1.2051 and a possible slide to 1.1994 / 86 support range (mid-March high and April 22 low), which will ideally maintain the downside.”

If there are to be any big moves in the euro exchange rates over the coming days, they are likely to happen tomorrow, when US inflation data is released, or on Thursday, when the European Central Bank presents its monetary policy update. The Forex markets will want to know if ECB President Christine Lagarde and her team are now considering whether or not to scale back their exceptional support to the economy, which includes ultra-low interest rates and generous quantitative easing.

If the ECB indicates that the economic recovery will be strong enough for it to consider reducing support through its quantitative easing program – known as PEPP – the euro could benefit from this.

The main theme for the Forex markets nowadays is the speed with which global central banks are getting out of their COVID-19 crisis support programmes, looking to exit early to see their currencies better supported. In this regard, the New Zealand dollar, the Canadian dollar and the British pound are three currencies that have all benefited recently from such a shift in the direction of their central banks.

Thus, the muted tone from the European Central Bank on the economic outlook for the region and the repetition of the firm commitment to maintain support may drag the euro lower. Commenting on this, Richard Kelly, analyst at TD Securities, said: “We look to the ECB to maintain that PEPP purchases will continue at a much higher pace than during the early months of the year. However, we believe purchases will eventually decline in the third quarter due to seasonality/liquidity, rather than macro expectations or financing terms.”

Goldman Sachs Economist Zack Bundle says: “This week’s ECB meeting will be the next major risk event; our economists expect the Governing Council to retain language indicating a ‘much higher’ pace of asset purchases than earlier in the year. Therefore, the looming weight of the decision means that the euro failed to find any momentum at the start of the new week, noting declines against the dollar in particular.”

So far, the general trend of the EUR/USD is still bullish, and there will be no real trend shift without the bears breaching the support level 1.2080. On the upside, according to the trend, a breach of the 1.2200 resistance level will increase buying, and thus move towards stronger ascending levels, the closest of which are 1.2255, 1.2320 and 1.2400.

All focus is on European data, including German industrial production, the ZEW reading of German economic sentiment and the Eurozone GDP growth rate, as well as the rate of change in employment. From the United States of America, the trade balance figures will be announced. 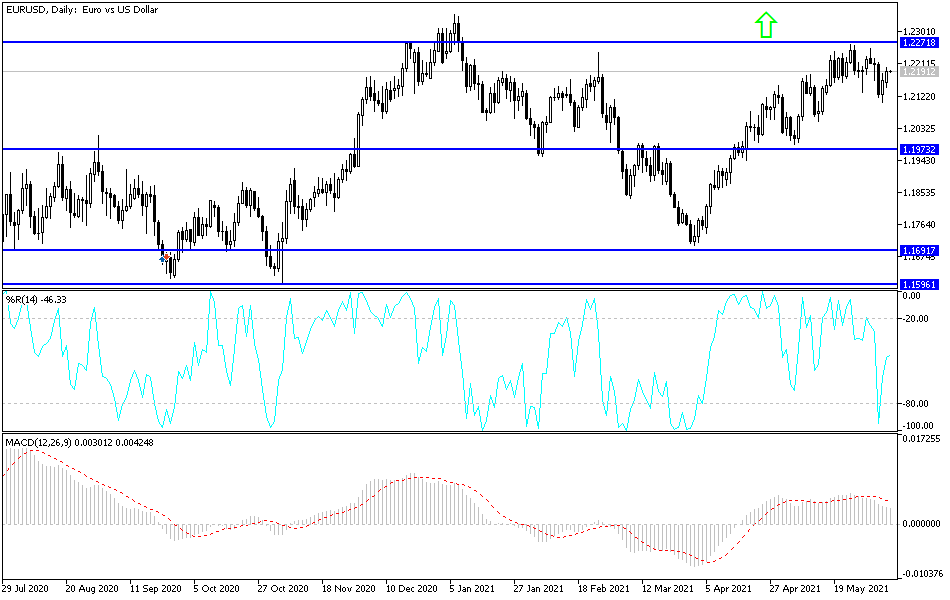