The AUD/USD immediately moved up a quarter of a cent on the Reserve Bank of Australia’s September monetary policy announcement. However, it then moved back to levels seen just before the statement. The central bank maintained both the cash rate target and 3-year government bond yield target at 0.10%. It also changed the amount of government asset purchases to a rate of AUD 4 billion a week at least until mid-February 2022. Previously, the RBA was purchasing 5 billion a week.

The central bank has previously made comments that while the Covid-19 Delta variant is causing economic disruption in the short term, they are looking through the current episode and expect that by early 2022, the vaccination rate will have been sufficient enough. Additionally, they have said any withdrawal of stimulus can be re-introduced should circumstances warrant it. 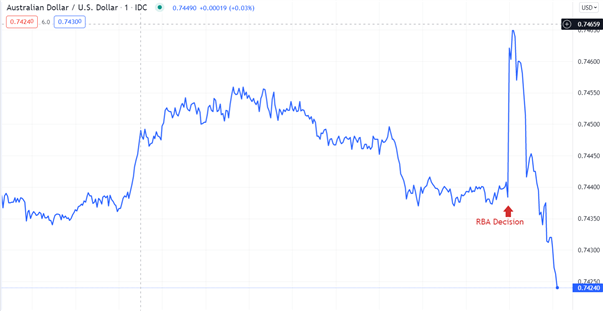 See also  US Dollar Forecast Holds A Break, But Follow Through Depends on Direction

Today’s announcement is against a backdrop of very strong second quarter GDP figures that did not include the impact of Delta and iron ore prices that have moved significantly lower in recent weeks. Lower iron ore prices dragged Australian mining stocks lower through the day. The S&P/ASX 200 was slightly lower prior to the meeting and was little changed in the aftermath.

Australian 10-year government yields were at 1.265% and consequently blipped up to 1.275% before retreating back below 1.26%. If this marks a turn in Australian long term yields, it may have consequences for AUD/USD and will be something to watch. 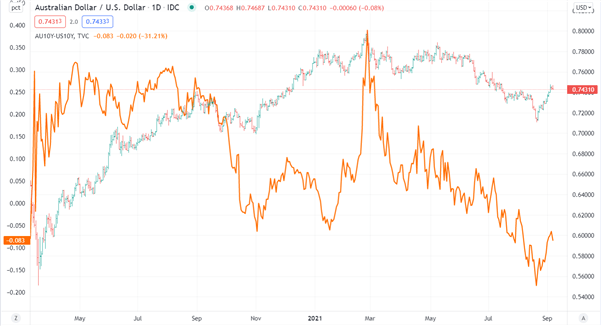 Looking ahead, there is a not much domestic data due until Australian employment figures on Thursday 16th September. With lockdowns ongoing in New South Wales and Victoria, the impetus for significant moves is more likely to come from external influences in the near term.