The Australian Dollar () is commonly referred to as a commodity currency. As in, the relative strength of the currency is correlated with the price of certain commodities. For the AUD, and precious metals are the commodities that significantly impact its value.

Be that as it may, there is more to the AUD than commodity prices. The actions, or inaction, of the country’s Central Bank is also a decisive variable affecting the price of the AUD. Therefore, a well-rounded analysis of the events concerning the AUD is helpful for traders of commodity currencies.

With this in mind, let us look at some of the key events likely to affect the commodity currency next week.

Is AUD sentiment about to turn positive?

A critical economic report is due from the Reserve Bank of Australia (RBA) on Monday, and traders will be watching and folding the results into their own trading decisions.

Australia Reserve Bank Governor, Philip Lowe, will be speaking on Monday. However, the RBA’s public announcements have recently fallen down the rankings of importance for traders. The RBA is stubbornly dovish, and no one is expecting them to make any changes to its base interest rate or asset purchasing any time soon. Yet, the 15-day SMA closing in on the 50-day SMA in the AUDUSD chart supplied indicates the bearish disposition of the AUD may reverse.

Iron Ore can only support the commodity currency for so long 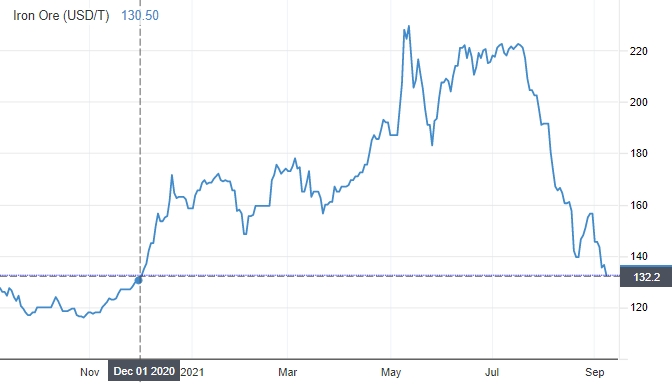 The price of Iron Ore has famously hit record prices this year, contributing to record Australian export values and the AUD reaching USD 0.79.

However, the high prices Iron Ore fetched in May have since evaporated, and with it, the AUD has fallen from its lofty perch. Currently, Iron Ore is priced at US $132.5 per tonne, a 2021 low representing a 40% decrease from its 2021 high. The price drop has been sharper than its rise, as China’s stockpile of Iron Ore kept rising and demand from Chinese manufacturers declined.

The price of Iron Ore is expected to remain somewhat robust for the remainder of 2021 before falling to US$100/T by March 2022. At least, according to Goldman Sachs and the Australian government’s commodity forecaster. However, the forecasts available were made before the slowdown in the Chinese economy became undeniable. The drop in Iron Ore could come sooner rather than later.

Countering the prediction that Iron Ore prices will fall

Countering the prediction that Iron Ore prices will fall is the developing political upheaval in the African nation of Guinea. The West-African country is a young up and coming Iron Ore producer. Its Simandou Iron Ore Project is expected to rival one of Western Australia’s most prolific mining regions. As such, the pricing prediction of Iron Ore moving forward into 2022 and beyond considered Guinea’s fresh supply of Iron Ore hitting global supply chains. Needless to say, if political strife in Guinea were to continue, prices might remain inflated for longer. In such a case, the AUD could rely on Iron Ore supporting a higher baseline.

See also  Will EUR/NOK Fall Below The Key Support Of 10.350 Soon?
FREE Webinars
)