Asia-Pacific markets will see a handful of economic data prints that may influence market sentiment. The primary is Tuesday’s interest rate decision from the Reserve Bank of Australia (RBA), when the central bank is expected to hold interest rates steady. The other potential high-impact event is the release of New Zealand’s employment data, also slated to cross the wires on Tuesday. With this in mind, AUD/NZD may see some volatility in the coming days.

The week will kick off with Australia’s Ai Group Manufacturing Index along with a final manufacturing PMI report from Markit, both for April. Australia’s economic recovery has been resilient, with the country performing well to contain any local Covid flair-ups and external factors, like rising iron ore prices, offering a welcome tailwind. However, a warning sign flashed last week with a downturn in inflation that will likely weigh on the RBA’s policy outlook.

Traders will probably have a close eye on data prints out of Australia to gauge economic strength and attempt to forecast the RBA’s next move. Perth, Australia’s fourth-largest city, could enter a snap lockdown – the second this month – following several residents testing positive for Covid. It appears a closure may yet be avoided, but the possibility itself could spook investors at a time when even solid progress seems tenuous.

Outside of Australia, South Korea will report manufacturing PMI and inflation data for April. South Korea’s economy has been one of the outperformers in the region, with its Q1 GDP posting a seasonally adjusted 1.6% quarter-over-quarter gain. India will also report manufacturing PMI along with the preliminary balance of trade data, according to the DailyFX Economic Calendar.

India, meanwhile, is suffering from a deadly wave of Covid infections that has world leaders, including the United States, considering travel bans from and to the world’s second-most populated country. According to the World Health Organization (WHO), India is nearing 220k deaths, with confirmed cases approaching the 20 million mark. So far, investors appear to be discounting this deadly wave of Covid, but that may change if the situation worsens and other key economic linkages are disrupted. 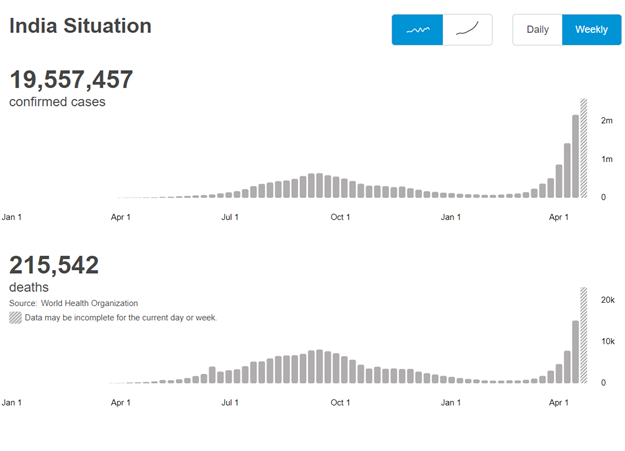 The Australian Dollar has been moving slightly lower against the New Zealand Dollar since the currency pair’s late March swing high. However, a bullish Falling Wedge has formed that could signal a potential breakout opportunity on the horizon. AUD/NZD would need to clear the upper trendline of the pattern before moving higher.

A positive signal in momentum from the MACD crossing above its signal line, as well as a Relative Strength Index (RSI) that recently crossed above the indicator’s 50 mid-point, indicate strengthening technical momentum(on the 8-hour time frame). However, the 20-day Simple Moving Average (SMA) is tracking lower towards its 200-day SMA. A cross below, if it occurs, would put a bearish spin on the technical outlook. 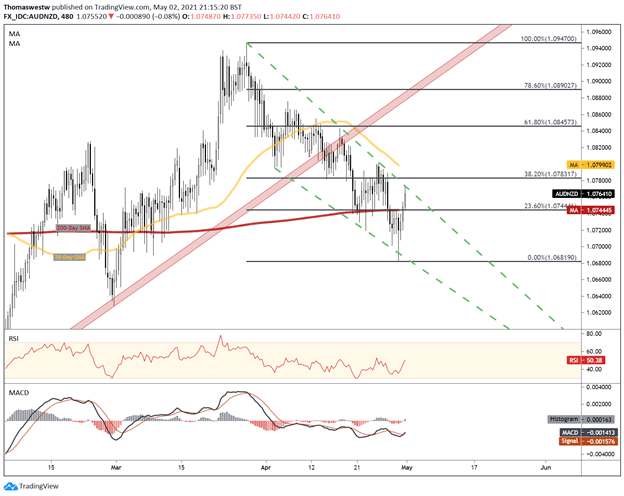