Yesterday, volatility increased as it had been expected. Annual in the United States accelerated to 5% and above market forecast of 4.7%. The inflation rate is growing rapidly, leaving the Federal Reserve no other choice but to increase interest rates. Neither markets nor the US economy is prepared for that.

All that should have led to the strengthening of the . Instead, the currency fluctuated and then grew slightly. An increase in the price of the euro was held back by the European Central Bank. Interestingly, as soon as Christine ’s press conference began, the euro started decreasing rapidly. That was due to the fact that the ECB’s president said nothing new.

The regulator saw rising inflation as temporary and expected the situation to return to normal shortly. At the same time, the central bank raised its forecast for euro area economic growth. Christine Lagarde also stressed that in order to maintain economic growth the ECB was prepared to increase the pace of bond purchases. That was what led many astray. At first glance, it might seem that it was all about expanding the quantitative easing programme. But this was not the case. The total size of the programme should remain unchanged.

The regulator simply could complete it earlier than planned. Moreover, the ECB would do it only if economic growth slowed down. In the end, that was what held back the single European currency. Thus, the regulator raised its forecast for euro area economic growth this year to 4.6% and for next year to 4.7%, which is quite a lot.

The actual growth rate is likely to be noticeably lower. So, within a certain period of time, the size of the quantitative easing programme will be increased. It is all about the expansion of the QE programme in the short term, though its total size should remain unchanged. That was the reason behind fluctuations in the price of the euro.

Investors tried to figure out what Christine Lagarde really meant. When they finally realized that nothing was going to change and the ECB kept making vague comments, they lost interest in mass buying of the euro. Basically, the outcome of the ECB’s Governing Council meeting kept the euro from rising further.

The EUR/USD pair was extremely volatile yesterday. As a result, the quote tried to break the support level of 1.2160. According to the 4-hour time frame, a breakout of 1.2160 was not confirmed: bears only pierced the level and the pair returned to its initial position.

Market dynamics is still increasing with speculators playing a special role as they drive the price up and down.

Under the circumstances, the price is likely to break any of the boundaries of the 1.2160/1.2200 range. Notably, consolidation beyond one of these levels on the 4-hour time frame will confirm a breakout.

In terms of complex indicator analysis, technical indicators are giving a buy signal on M1 and H1 charts because the price returned to the level of 1.2200. 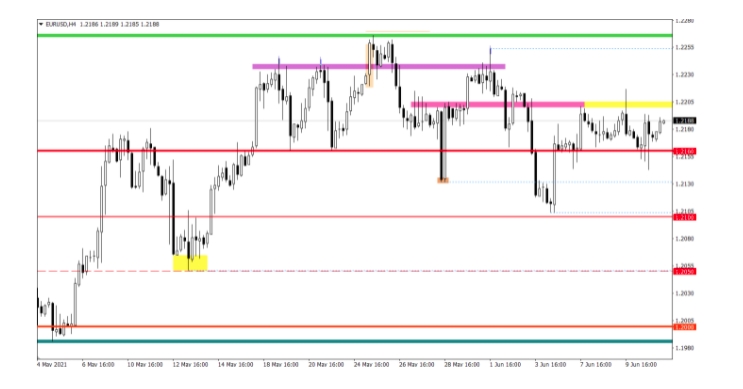