GBP/USD still looks to be trending higher even though Arlene Foster will step down as leader of Northern Ireland’s Democratic Unionist Party on May 28 and as First Minister of Northern Ireland at the end of June after a revolt by the DUP’s Stormont Assembly Members and Westminster Members of Parliament.

The next election for the Assembly is not due until May next year but, in the meantime, Deputy First Minister Michelle O’Neill of the opposition Sinn Féin party is likely to demand changes before agreeing to continue sharing power with the DUP. While Sinn Féin is a Republican party and the DUP favors remaining in the UK, the two have been working together and increased tensions between them would add to the political risk for GBP/USD bulls. 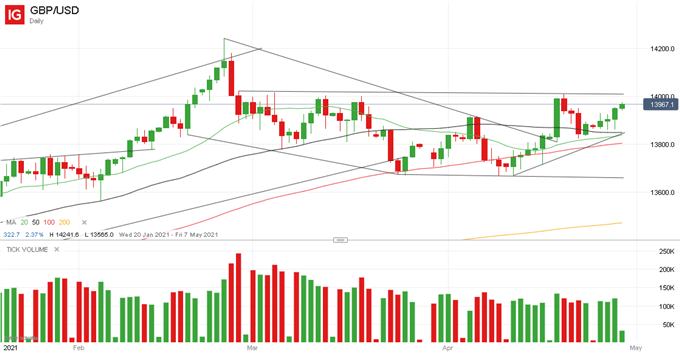 Nonetheless, GBP/USD continues to trend higher and is still well placed to hit the 1.40 level, which is important psychologically, and just above it the 1.4010 level that was the high reached on April 20.

Note that volume has been reasonably high in the advance that started on April 23 and that too is a signal that the rally has yet to run out of steam. However, any signs of a political stalemate in Belfast would likely dent sentiment towards GBP.